New Delhi: A midnight summit between Indira Gandhi and Zulfikar Ali Bhutto, Bhutto pleading with Gandhi to free 93,000 Pakistani prisoners of war, a failed Kashmir deal… The Simla accord, which marks its 40th anniversary July 3, may be a distant echo today but its spirit of resolving all issues bilaterally seems to have prevailed.

A resolution of the Kashmir dispute, the core strategic objective of the so-called “tacit understanding” between Gandhi and Bhutto, however, appears to be going nowhere. Both India and Pakistan still stick to their stated positions. 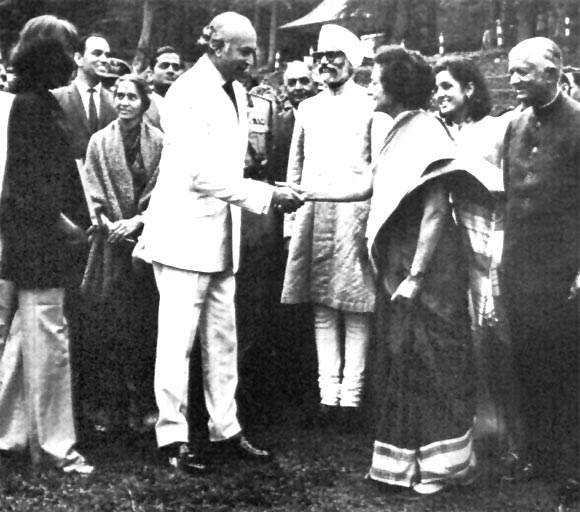 In 1972, then president Bhutto travelled to Simla (now Shimla) to sign a peace pact with prime minister Gandhi after the December 1971 war broke up Pakistan, with its eastern wing becoming an independent Bangladesh.

According to K.N. Bakshi, who was India’s assistant high commissioner in Karachi and was in Simla to assist in the negotiations, Bhutto’s priority was to secure the withdrawal of Indian forces from the 5,600 square miles of territory they had occupied in the Punjab and Sind.

He also wanted the 93,000 Pakistani prisoners of war released and any final solution of the Kashmir dispute postponed given New Delhi’s post-war strategic advantages.

In all these objectives, Bhutto largely succeeded despite India’s military victory.

After intense and tortuous negotiations that virtually collapsed till Bhutto reportedly held one-on-one talks with Gandhi on the evening of July 2, the Simla agreement was signed at 12.40 a.m. on July 3, 1972. 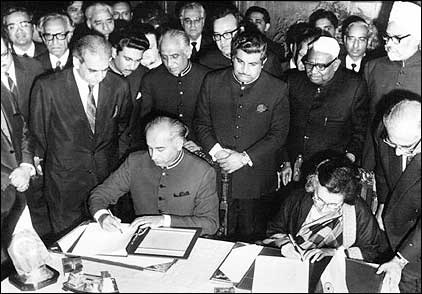 The agreement laid down the principles to govern relations between India and Pakistan and steps to be taken to further normalize bilateral ties.

It bound the two countries “to settle their differences by peaceful means through bilateral negotiations”.

There was no explicit mention of the Kashmir issue. But there was a tacit understanding that the the Line of Control (LoC) resulting from the 1971 truce should be converted into the international border, marking the final settlement of the Kashmir dispute.

Then bureaucrat M.K. Kaw, the author of “An Outsider Everywhere” (Konark Publishers), has vivid memories of those fraught moments.

“The talks had collapsed and everyone had gone to sleep. Before midnight, Bhutto got the idea and went to Indira Gandhi’s room. He fell at her feet and said he can’t go home unless India released Pakistani prisoners of war,” recalls Kaw.

“He told Gandhi that he would be lynched if he went without an honourable pact and pleaded with her to show the way.”

Gandhi, according to Kaw, told him that she wanted the LoC to be converted into international border. If that was done in writing, Gandhi pledged to meet Bhutto’s demands.

According to P.N. Dhar, the then secretary to Indira Gandhi, the Indian leader asked Bhutto: “Is this the understanding on which to proceed?”

He never kept his word, and refused to have any written records of these conversations.

Looking back, Kaw feels that the pact and the drama preceding it showed that Pakistani leaders don’t keep their word.

“Bhutto seemed to be a smart-alecky and smooth character. Bhutto never had any intention to keep his word. It just shows duplicity and equivocation Pakistan has used in its relations towards India.”

Veteran journalist and Pakistan watcher Kuldip Nayar is not so pessimistic.

Looking at the legacy of the Simla accord, said Nayar: “Bilateralism has come to be established as the defining feature of the India-Pakistan relations. Bilateral issues are no longer being internationalised. That’s its major achievement.”

Another achievement, according to him, is that the ceasefire has largely held. There has been no major war except for the 1999 Kargil misadventure.