Chandigarh: The violence at the Maruti Suzuki car manufacturing plant at Manesar near Gurgaon this month brought back memories of the July 25, 2005 violence at the Honda motorcycle plant, also in Manesar, in which scores of people were injured.

With a senior Maruti Suzuki general manager brutally killed and nearly 100 injured in clashes inside the Maruti plant July 18, the Haryana government headed by Chief Minister Bhupinder Singh Hooda found itself on the backfoot. 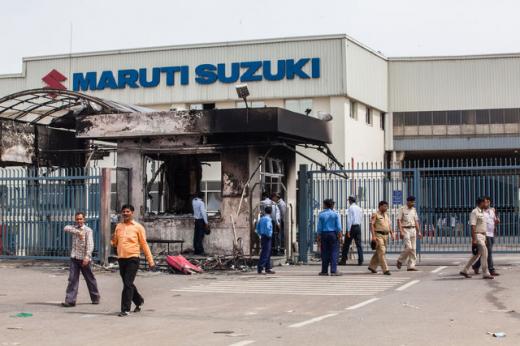 The Maruti management declared a shutdown in the car manufacturing plant, where high-selling models like Swift, DZire and SX-4 are made, after it was extensively damaged by violence and many portions were allegedly set on fire by the mob of workers. Following the incident, there was talk that the management was considering relocating its manufacturing facility to Gujarat.

This pushed Hooda and other top functionaries in the state government into overdrive. Hooda met with Maruti chairman R.C. Bhargava in New Delhi this week. The meeting ended on a positive note for the government with Bhargava declaring that the country’s biggest car manufacturer was not moving out of Haryana.

“There is no question of shifting of Maruti from Haryana. How many times do I have to tell that the question (of Maruti shifting to Gujarat) is 100 percent fiction. The state government is with us and we are one,” Bhargava told journalists in New Delhi.

The immediate problem of Maruti’s shift may have been sorted out for now, but the Hooda government is still far from addressing the issue of repeated labour unrest in Manesar, 45 km from New Delhi, where some of the biggest names in the automobile sector and other industries have their manufacturing base.

“We are giving full cooperation to the Maruti management to help them resolve this issue,” said Hooda, who is on the defensive.

The labour unrest is largely over the issue of contractual labour hired through labour contractors. This work force, which literally drives India on four wheels, is grossly underpaid and does not get any of the benefits given to regular Maruti employees. This has led to a face-off between the workers and Maruti management earlier as well. The Manesar plant had to be shut in the past, leading to losses running into several crores of rupees.

The Maruti Suzuki plant was established in Gurgaon in the early 1980s and went on to become the single largest car manufacturer in the country. The company recently sold its 10 millionth car, having rolled out the first car in December 1983. It had achieved the five million car sales mark in 2006. The company’s first manufacturing plant is in Gurgaon while the new one is in Manesar.

On July 25, 2005, contract workers of the Honda plant had gone on a rampage at the factory and clashed violently with the police. The issue at that time was the demand for higher wages. Several policemen were also injured as the violence took an ugly turn.

The Hooda government has in recent days been facing unrest in various parts of the state with agitating farmers refusing to part with agricultural land being acquired by the state government for more industrialisation.