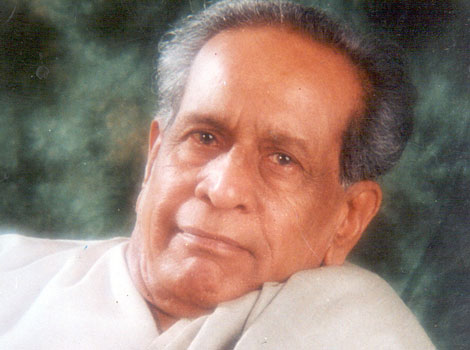 Some time ago, when I read news of the sad demise of perhaps the greatest exponent of Hindustani classical music, Pandit Bhimsen Joshi, my brain immediately conjured up an image of the kind, joyful, expressive face and my memory flashed back forty years to that spring day of 1971 when I first came face to face with the legend.

I had been selected for the Indian Forest Service in 1971, and was directed to report for training at the National Academy of Administration, Mussoorie. Apart from the 20 odd IFS probationers, there were also probationers from the IAS, IPS and Central Services attending the Foundational Course that all fresh entrants to the Civil Services had to undergo.

I guess ninety percent of us were fresh out of college, while the remainder had already tried their hands at other jobs before opting to join the civil services. Some were already married, some had kids, but the majority was still single.

In fact the Academy was a fine place for intimate friendships and romances to flourish, and many a couple owes their togetherness today to the idyllic environment of Charleville. Even if not culminating in marriage, the bonds formed at LBSNAA were strong and enduring.

Knowing that they would be spending most of their training period with their own service batchmates at their respective professional institutes, almost all the probationers sought to make the most of their stay at Mussoorie.

Director Sathe actively encouraged us to interact with people from other services and with members of the opposite sex. This, he told us, would help us develop our social skills, which were an important part of civil service.

The politeness, courtesy and friendliness developed then have stood me in good stead during my career of over 37 years. More work has been successfully achieved through personal contacts with friends made at Mussoorie – “the school tie network” – than through official channels.

Much water has flown down the Yamuna since 1971, but I still treasure the time spent at the Academy. The music sessions in the Lounge, the movies in the Library Hall, the games in the Billiard Room under the stairs, the informal dinners on the lawns are all as fresh today in my memory as in the pictures clicked by Mela Ram and Sons.

The walks along the Camel’s Back Road, ending invariably with coffee at the Whispering Windows, are unforgettable. Strolls to Company Garden, Library Point, Kulri and Landour in the company my good friends AP, Rummy, Kutty and Prem were memorable.

Never for a moment should it be concluded that the four months we spent together at the Academy were all play, and no work! Joint Directors Gopalakrishnan and Bagchi, along with Professors Mongia, Sadasivan, Mathur, Sethi et al, kept us busy from 10am to 4 pm with lectures, seminars and tutorials on subjects as diverse as economics, history, sociology, public policy and administration.

We were taught how to get along with our bosses and how to manage our juniors. From time to time, we also had guest faculty to talk to us about their respective areas of expertise. And one of these was Pandit Bhimsen Joshi.

It was a warm, drowsy spring afternoon in Mussoorie. About thirty of us were in the lecture hall preparing to endure another boring lecture, this one on music appreciation. Rummy, as was his wont, was busy with his Times crossword, Kutty was doodling away in his notebook and I, if I remember correctly, was writing a letter to my fiancé.

Then in walked JD Gopalakrishnan, accompanied by a short, thin, fiftyish, salt-and-peppered haired man who, he said, would talk to us about Indian classical music. Little did we know then that we were being addressed by a virtuoso.

How ignorant we were then! Panditji started off with in introduction to the history of Indian classical music, the various ragas and their origins, and some exponents of these. Gradually a few of us started drifting off to sleep.

I was too engrossed in my letter to even pay attention to what was going on. And then he offered to demonstrate what classical vocal music was all about!

I distinctly remember him asking whether any of us played the tabla. Wonder of wonders – Gokhale raised his hand. Panditji asked him to get his tablas and accompany him. Gokhale was thrilled. He rushed off to his room and was back within no time.

Great man that he was, Panditji let Gokhale accompany him for a few initial notes. (Gokhale never let us forget for the next two months that he played accompaniment to the great performer).

Thankfully, after about five minutes, he asked Gokhale to step aside, but not before praising and thanking him. Then he dug out his little tape player, inserted a cassette with recorded sarangi and tabla, and began the most memorable demonstration I have ever had the good fortune to listen to!

Although I had no ear for serious classical music at that time, Panditji’s deep baritone gradually began to penetrate my senses and soon a tremor ran through my body and the hair at the nape of my neck literally prickled.

All too soon the allocated ninety minutes of the lecture were over. But so engrossed were we with the performance that we did not want the session to end. We begged Panditji to continue for some more time. Gopalakrishnan, a stickler for time and discipline, agreed for the session to continue if Bhimsenji was amenable. God bless the man, he was!

Those who wanted to leave were allowed to do so but about fifteen of us sat on. As news filtered through the campus that Bhimsen Joshi was giving a performance in the lecture hall, people, probationers and faculty alike, started filtering in. Rummy left but Kirti, his wife, rushed in to take his place.

The room meant to accommodate about fifty people was soon filled to overflowing and people were lining the corridors too. It was a memorable evening. The lecture was forgotten and Panditji gave us an impromptu performance that all of us who were there remember to this day.

There were no accompanying tanpura, harmonium or tabla – just Panditji and his little tape player! We sat enthralled as he ran through the entire gamut of ragas including Shuddha Kalyan, Miyan Ki Todi, Multani, Bhimpalasi, Darbari, Ramkali, and several khayals.

Panditji had planned to drive down to Delhi that evening, but he preferred to spend time with a bunch of young, uninformed (but musically inclined) minds and instill in them a lasting love for classical vocal music.

If my memory serves me right, we sat in his presence, in that enclosed space, for almost five hours, every minute of it a delight. God only knows how many more uneducated minds he influenced, but I know that I was forever changed that day.

Today, as I write this – my homage to the great Master – images of that evening ‘flash upon the inward eye’ in the words of Wordsworth. May God Bless his Soul!