Srinagar: Authorities have stepped up preparations for the annual ‘Amarnath Yatra’ that begins June 24 in Jammu and Kashmir, and for which three lakh devotees from across the country have so far registered, officials said.

Union Special Secretary for Home Ashok Chadda Monday reviewed the preparation for the pilgrimage at a high-level meeting at the Pahalgam base camp. The track clearance from Pahalgam base camp in south Kashmir to the Amarnath cave shrine in the Pir Panjal range in north Kashmir would be completed by June 10, officials said.

Chadda also asked the army, police and paramilitary forces to make foolproof security arrangements for the conduct of smooth and safe Yatra. 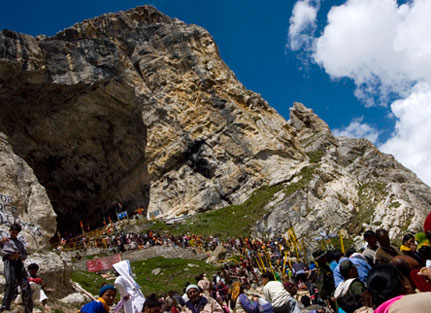 Three lakh devotees from across the country have so far registered for this year’s pilgrimage that begins June 24 and ends on August 2, they added.

The union special secretary for home stressed close coordination among various departments for a successful pilgrimage.

Various departments have been advised to dump adequate quantities of essentials like rice, flour, sugar, LPG cylinders and fire wood, medicines, portable oxygen cylinders, tents, drinking water for use of pilgrims at all halting stations like Chandanwari, Sheshnag, Panjtarni and the Amarnath Cave.

Bharat Sanchar Nigam limited (BSNL) authorities have been directed to establish satellite towers all ther way to the cave shrine to provide communication facilities to the pilgrims as well as the security forces.

More than 630,000 pilgrims visited the shrine last year, breaking all the previous records. The myth has it that Lord Shiva narrated the secret of immortality to his consort Parvati at the cave, hence the name “Amarnath” meaning immortality.