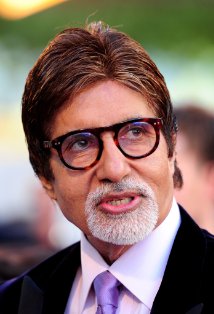 Mumbai: Mega star Amitabh Bachchan said Wednesday he was happy to be cleared of the Bofors allegations but was “pained” this had happened after 25 years.

Speaking to reporters here, Bachchan said that he had “lived with humiliation and loss of reputation” all these years.

However, he wished his father, the late Harivanshrai Bachchan, had lived to see the development. “My family knew the truth on Bofors all along, from day one,” Bachchan said.

Bachchan’s reactions came in response to fresh revelations in the Bofors case in which the Swedish investigator said his (Bachchan’s) name was planted by Indian investigating agencies.

From Amitabh’s blog: http://bigb.bigadda.com/
I see, therefore I realize. I feel, therefore I emote. I know, which is why I consider. I smile, because I smile within.

My faith restored, I see, feel, know and smile. Families function well when they share and absolve. We function well, because we endorse all that is shared among us. We share but one – the affection and the genuine grace that we inhabit each day. Without it we would have been languishing in non entities of our own complicated existence ! During the course of these four wonderful years, I have discovered but one salient fact. Together we are a formidable force. We all come from issues, circumstances and disagreements. We were perhaps alone and despondent. We had known that sharing was the prescribed remedy in such, but we never realized its potency. And when it happened, when we met, discovered and acknowledged each other, the flood gates opened and washed all of us away – momentarily !

The waters have receded. The dirt and rubble that came along has been washed away, and we sparkle in the fresh ambience that most waters enshrine !

Teach me by example. Ostracize me with comment. Guide me with your correctness. But do not destroy me by the absence of your company. That would be unbearable – now and ever !!

There are tests that are conducted in varied environs – to reach the skies in unlimited realms. But giving up on one because it failed, would be akin to giving up on life before its turn. There is never an easy or perhaps timely solution. But there is time. Time for the fact and the truth to prevail. Many an incident has passed by in life, where the accusation, the improbable was tested against reality. It looked and felt and was believed for that moment in the worst. Fighting a storm at it worst fury would be stupidity. But waiting for it spoils to settle, for the rain to stop and the winds to recede, gives us all a sound reason to think in the right direction. And mostly the wrong direction given and taken by some against you, falls on right track. And when that happens, it does not take away the burden of its presence then or now. It fortifies the strength of belief and forbearance.

I speak from personal experience and personal exoneration. 25 years after the incident, I read today from one that pioneered accusation and investigation, of innocence. Of the fault that never lay before me. Of one that remained and shall perhaps remain a darkened spot, blemished beyond all recognition, but in admittance of wrong doing against me. No one shall be able to understand or even remotely fathom, the hours and days and months and years of the anguish of petulant blame, that I had to go through. But will it really interest another ? No it shall not. For, those that colluded in desperation still abound, without as much as a conscious twitch on their well articulated and fashionably cleaned skins. And would it really have been of any relevance if they had ? Of course not ! Their mission was misguidance, connived to its maximum, for issues that never ever did be of any concern in the execution of their own selfish mercenary agenda. They won momentarily. But lost ultimately. Lost position and strength and power yes, but importantly their conscience. And today that counts the most !

Loss of ones conscience would have to be the most defeating element in our lives. Somewhere we shall all fall victim to it. But, greatness lies with them that redeem it …. in time !!

Time to ponder .. to set at rest, that which remained restless ..

Are you restless tonight !