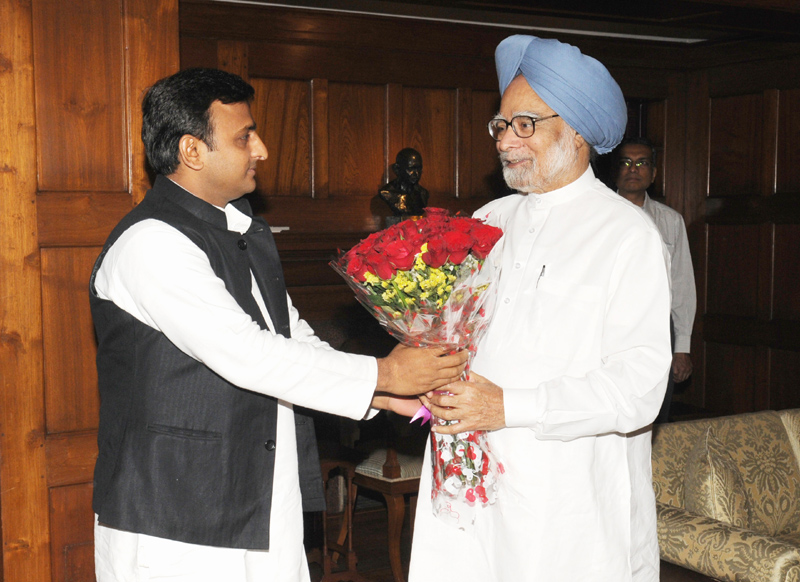 The meeting at the Prime Minister’s House at 7, Race Course Road was billed as a “courtesy call” by Akhilesh Yadav, who took over a month ago as Uttar Pradesh’s youngest chief minister at 38.

But he did go armed with a long list of expectations the state government has from the centre.

“We have not demanded any package for the state. It was a good meeting with the prime minister. A host of issues related to Uttar Pradesh, including NREGA, roads, problems related to coal shortage, the Kumbh Mela to be held soon and the Ganga cleaning project were discussed,” Akhilesh Yadav told reporters after the meeting.

The chief minister said he had demanded the central government’s help and sanction of requisite funds for various centrally-aided projects, including those in the health, education, power, surface transport, drinking water, flood control and student welfare.

“The prime minister assured us that funds will be sent for all the schemes being implemented in the state,” he said.

The chief minister also apprised the prime minister of preparations with regards to the Kumbh Mela to be organised in Allahabad and asked the government to increase its share in infrastructure development for the religious congregation of millions from across the world.

Akhilesh Yadav informed Manmohan Singh that his government has undertaken certain “course corrections” and was trying its best to bring back the state on the track of development and fiscal growth.

Agriculture, he told the prime minister, was a top priority of the Samajwadi Party (SP) government in the state. He asked for support in the power sector, crucial for growth of the agriculture sector.

The chief minister also told Manmohan Singh that the funds the Planning Commission allocated for development of Bundelkhand and Poorvanchal were inadequate and demanded that these be increased, sources said.

Besides, he sought help for fighting the scourge of Japanese encephalitis in seven eastern districts of Uttar Pradesh. After hearing him out, the prime minister assured of all “possible help” to Uttar Pradesh.

“The central government should grant these funds, only then will the development work reach the people. If UP moves on the path of progress, then the country will move on that path too,” Akhilesh Yadav said.