New Delhi : For millennia, they have shared the world with their human masters. They have carried their owners in the thick of battle, across grasslands, hills, plains and the highest mountains. But there has never been a more trying time for India’s six indigenous breeds of horses than now. 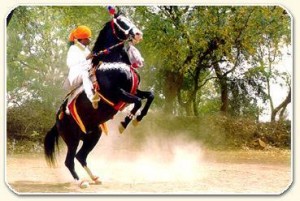 In January this year the media in Gujarat speculated that there were fewer than 50 purebred Kathiawari horses left.

Warns Satyajit Khachar, a Gujarat-based horse breeder: “If they are not saved now, a stage will come when because of declining numbers, the gene pool will get restricted. Then breeders will resort to inbreeding to preserve the breed’s purity.”

Raghuvendra Singh Dunlod, secretary general of the Indigenous Horse Society of India, a Jaipur-based NGO working towards conserving the six breeds, said: “A horse breed is declared threatened when fewer than 50 breeding mares are left, according to the Brussels-based OIE or World Organisation for Animal Health.

“By that yardstick, I don’t think that these six breeds are on the verge of extinction. But some of them, if not all, will slide towards that end if something is not done soon.”

“Kathiawaris and Marwaris are definitely not threatened. The seminal work done by private societies and NGOs alike in the last 10-15 years has resulted in bringing them back from the brink. Great work is also being done on the Manipuri pony. Both the state government as well as private farms rear them.”

However, he feels the other three breeds need active conservation efforts. “Very little work has been done for the Zanskari, Spiti and Bhotia ponies. The Bhotia pony is the most threatened,” Dunlod believes.

What then should the government, private breeders and civil society do?

Virendra Kankaria, head of the Ahmedabad-based Equestrian Club of Gujarat, said : “Horse breeding is not an economically positive activity. Hence, sport and passion are the only two drivers for the survival of these breeds.

And the media can help too.

Most experts are united in the view that the usage of these animals in sports at national and international events will result in their marketing and better breeding avenues.

“We are working to convince the Indian Army that it should use the Marwari for sports since it is suited for endurance and tent-pegging,” says Dunlod.

“Police and paramilitary forces in India still use these horses, not just for sports and ceremonial occasions but also operationally. Horses are used for traffic control, mob control, remote area patrolling. We use all kinds of breeds. They should just come up to our specifications,” says R.D. Zala, a retired IPS officer and horse lover from Gujarat.

But while the army, police and paramilitary do use these native breeds for sport and other activities, racing clubs are not always receptive to ideas.

“I approached the Royal Western India Turf Club (RWITC) in Pune. They were so snobbish. They said native breeds have diseases and thus could not race them in their race courses,” claims Dunlod.

Kankaria says, “Racing is a regulated activity and a controlled group where rules have been laid down not to accept any animal other than that which is registered with the Thoroughbred stud book. We have found it cheaper and easier to import polo ponies rather than work on our breeds.”

Dunlod also feels the government is hindering conservation by not allowing these breeds to be exported. “If they are exported and showcased worldwide, foreign funding will result in improved breeding practices, thus saving them.”

India’s ‘native steeds’ are staring at an uncertain, if not calamitous future, just two years ahead of a century since World War I that will commemorate the greatest contribution of horses towards a human enterprise.
IANS