Shimla : It was a disgraceful show by MLAs from both the Congress and the BJP in the Himachal Pradesh assembly today as they screamed , abused and sometimes pushed and boxed each other inside the house .

Despite repeated requests by the speaker to maintain calm the MLAs ignored him .The shouting went on for over an hour from both sides.

The opposition Congress MLAs were positioned in the well of the house while the BJP MLAs stood at the edge of the treasury benches .

Both the camps were only inches away from each other as they glared , gesticulated , shouted , fumed , abused and sometimes hit each other . And always there was the constant shrieking . 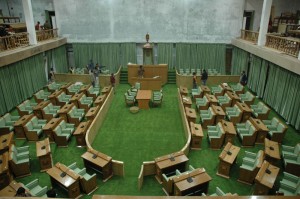 Himachal is known for its quiet and peaceful way of life , so the hill folk today were naturally shocked by the behavior of their elected leaders even as more such scenes are expected in the coming days .

Observers say whatever the reasons these lawmakers have no right to behave like this .

Others said MLAs from both the sides are putting up this appalling show just to outmatch each other in an election year and somehow attract the attention of their voters .

If such behavior continues for the rest of the budget session the voters should boycott such leaders in the coming assembly polls later this year .