Dehradun : With the Bahujan Samajwadi Party (BSP), which has three members in the 70 strong Uttarakhand House, having decided to be a partner in the state government, the permutation and combination of the cabinet is likely to be on entirely different lines than expected earlier. 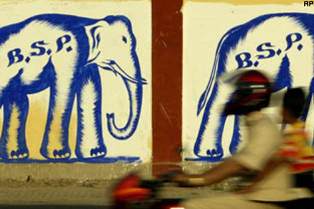 Though the Congress high command has yet to name its leader of the state legislature party, who will be invited by the governor to form the government, but the focus has now shifted from the three independents and lone UKD-P MLA, who had given support letters to the Congress earlier, to the BSP.

It was being presumed earlier that the three independents (all Congress rebels) would not only be inducted in the cabinet, but could have a say in who will be the next chief minister of Uttarakhand.

But apparently now with the BSP support, this is unlikely to happen and perhaps only one of the three will get a ministerial berth.

And for the UKD-P, which was also looking forward to having its lone MLA inducted in the cabinet, it appears to be curtains.

The party was thinking of improving its mass base, which has over the years dwindled sharply, by using its only MLA to arm-twist the government in making it yield to its demand. Obviously this is not going to happen any longer.

Senior Congress leaders of the Congress admitted, albeit on conditions of anonymity that under the earlier scenario, without the support of the BSP, all the four “outsiders” would have to be accommodated in the cabinet. This would at best leave scope for inducting of seven of the 32 party legislators.

However now, they felt that whosoever is the chief minister could bargain with the BSP and induct one of its MLAs as a minister with an important portfolio and one independent could be accommodated at the minister of state level.

This will leave at least nine berths which the Congress legislators can be accommodated in, they conceded.

But they conveyed fears that the BSP support could be detrimental in the interest of the party in the long run.

“Obviously the BSP, whose numbers in the House has come down from eight to three, will again try to consolidate its position amongst the masses, so that it can improve its tally in the next vidhan sabha elections and will work in this direction with the help of the government. This is what will have to be kept in check”, they pointed out