Shimla: Once regarded as the most important religious festival in the higher hills of Himachal, Mahashivratri though still celebrated with much fanfare at Mandi and Baijnath, it is fast losing out its traditional fervour to others festivals in the region.

“In the last 40 years, much changes in the religious and cultural lives of hill people have come about, says Devisaran, a retired teacher from Kotgarh.

Holi and Diwali which were low key festivals and Karva Chauth which was not even part of the social milieu are being celebrated with much fanfare, and Mahashivratri, which was the most important religious festival in the region, does not have the same standing today,” he says.

Recalling the old times, he added, the whole community throughout the year would store grains, oils and arrange for red meat so as to have enough food a three day festivity to mark Shivratri.

The festival is celebrated as an occasion when Lord Shiva, the presiding deity, is married to his consort Parvati to the accompaniment of music in the snowy world of Mount Kailash.

With a bonfire to ward of the cold, the community would visit each household in the locality to salute the lord with a loud call of ‘Daal Mahadev’ before gathering to a night of dance and music where folk songs of Lord Shiva were sung and orally passed onto younger generations over the centuries,” said Devisaran. “But all that has changed and much of that centuries old folklore heritage is lost,” he adds.

“Modernity has eroded much of the uniqueness of hill valley cultures that like glaciers were otherwise sheltered in landlocked regions. Traditional festivals centred around the local deity have lost ground to other ones,” says V Tandy, a senior government functionary who has documented some the noticeable changes coming about.

Even at Mandi, the Mahashivratri festival or be it the Dusherra at Kullu, the weeklong festivities in their new avtar are showcased as international festivals where cultural troupes and pop stars performances jostle out the local folklore in order to entertain.

More than 200 local deities are scheduled to congregate at Mandi by Monday to celebrate the festival that is said to have a legacy dating back to 1526, when the town was founded.

“Mahashivratri festivities here are to be celebrated from Feb 21st to 27th,”said Davesh Kumar, the organising district magistrate of Mandi. 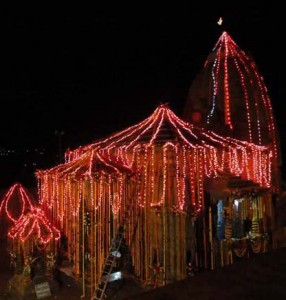 At the historic Shiva Temple in Baijnath, Shivratri is the main festival when the stone sculpted temple is decorated with flowers and pilgrims from far and near converge to seek blessing.

Legend holds that it was at this temple that Ravana, the King of Lanka, after doing severe penance attained the boon of immortality from the presiding deity.

Not only is the musical masterpiece Ravana’s Tandav Strotum said to have been created at this temple but to the day, Dusherra festival as a mark of respect for Ravana is not held at the premises.