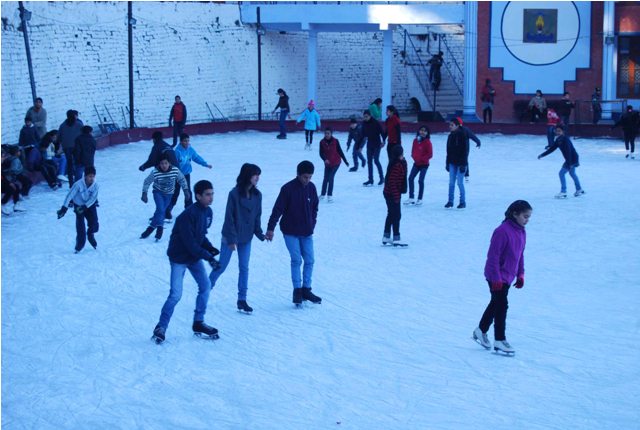 Shimla : The fun-filled, exhilarating skating days are over. Though the winter cold lingers on, Asia’s oldest natural ice rink here cannot be coaxed into life as the snows have all gone. The rink has been officially closed, signalling the end of the season.

“No more skating sessions are possible now. It’s now officially closed till the next winter,” Bhuvnesh Banga, secretary of the skating club set up in 1920, said Monday.

“It’s now almost a fortnight since the last skating session was held,” he added.

But the club authorities are happy with the excitingly busy season.

This time 56 sessions were held, most of them in December and the middle of January.

The rink held 86 sessions during 2010-11 when winter was quite chilly compared to the previous five or six years. In 2009-2010, it hosted 77 skating sessions. But a year earlier, only 27 sessions could be held, the lowest in the rink’s 92-year-old history.

Banga said that 2011-12 was comparatively good for ice skating as Shimla experienced less cloudy days during the peak winter from December to February.

“If the sky is cloudy, the night temperature rises sharply. So, crystal-clear skies are more congenial to freeze the water naturally and quickly,” he added.

The club authorities sprinkle water on the clay ground of the rink that freezes under natural conditions overnight.

The idea of a natural skating rink was developed by an Irish military official named Blessington who lived in Shimla during the Raj. He had inadvertently kept a bucket of water outside his residence and in the morning found it frozen. That gave him the idea of a skating rink and he created a small one of his own in 1920.

Shimla old-timers say, in the early days of the club more than 150 sessions could be held in a season. Growing population, increasing human activity, and global warming have obviously taken their toll over decades.

“Till the late 1970s, the skating season would begin in November and was on till the end of February. Of late, it has shrunk to two months from December,” octogenarian ice-skating champion Madan Lal Sharma said.

Environmentalists blame the declining number of skating sessions to rising air pollution, high intensity of human activity and deforestation in the vicinity of the rink, which is located close to the old bus stand.
IANS