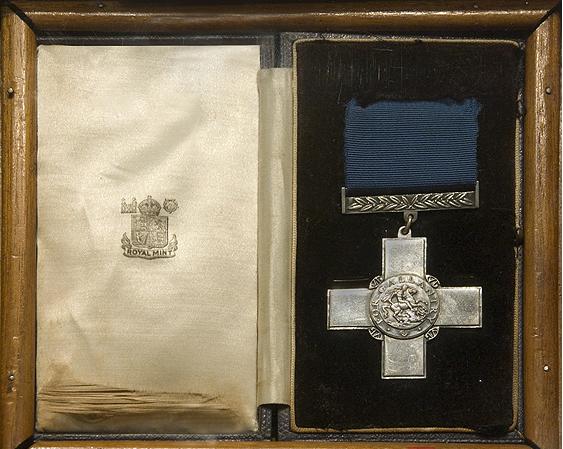 Shimla : Hopes to bring back the George Cross awarded to a pre-independence Indian soldier have grown dimmer as the British authorities have turned down the plea of an Indian investigating agency that the medal was stolen, says an official.

British authorities observed that the medal was not a stolen property but had been purchased by the current owner, Ashok Nath, a non-resident Indian who is settled in Britain.

The medal recipient’s widow, Brahmi Devi, 77, who lives in a village in Bilaspur district of Himachal Pradesh, had claimed that it was stolen from her residence.

“The British investigating agencies in its report sent to police here have ruled out the possibility of theft and cheating. They said the medal was genuinely purchased by Nath from S.L. Jain (a coin and medal dealer based in Delhi),” Director General of the Criminal Investigation Department I.D. Bhandari said .

He said there is a bleak possibility of bringing back the medal to India.

“There is a possibility that the medal can be again listed for the auction. But still we have not lost hope. Three days back the official concerned (here) have been told to relook into the matter,” he added.

The medal was allegedly stolen from Brahmi Devi’s house in 2002. She had reported the theft Feb 3, 2002.

Her husband, Kirpa Ram was awarded the George Cross, considered the civilian counterpart of Britain’s highest military decoration – the Victoria Cross, for sacrificing his life to save his comrades while disposing of a misfired rifle grenade at a camp in Bangalore Sep 12, 1945.

Brahmi Devi received the medal on her husband’s behalf from the then Viceroy, Field Marshal Lord Wavell, in 1946.

Bhandari said the British authorities’ investigation was based on a DVD purporting that the George Cross was being sold by Brahmi to a man named Kirpal Singh, who was accused of stealing it.

He said they didn’t take into notice that Brahmi was illiterate and aged. “They didn’t go deep into the facts of the case that how a poor woman was deceived and her innocence was exploited to get the medal.”

During investigation, Brahmi Devi, who was widowed at 13, said she had never sold the medal to anyone.

According to Bhandari, the state police are demanding the interrogation of Nath, who is based in London.

Nath, in one of his communications to Himachal police in 2009, said he had acquired the medal in good faith nine years ago from Jain after being shown two affidavits along with a video which convinced him that the medals had been acquired in a proper manner.

The issue of a stolen medal came to light when Britain’s leading auction house Dix Noonan Webb listed the medal for auction Dec 2, 2009.

When the controversy arose, the head of auctioneers Dix Noon Webb, based in Mayfair, London, had then said that Ram’s George Cross medal was “disposed of” by his widow in 2000 – and not stolen from her house as she claims.

Later, on the intervention of the Indian government, the British authorities withdrew the medal from the auction.
IANS