Dehradun : Some spend a week, some a fortnight. And some like Germany’s Stephanie have spent more than 40 days away from their mainstream lives on an off-grid community farm in the Himalayan foothills of Uttarakhand.

The farm is an attempt to demonstrate that an elementary way of leading one’s life could also give the happiness people search for in the materialistic world around them. Hari Pant and Richa, a father-daughter duo, call it the Himalayan Farm Project (HFP) in absence of a more appropriate name.

Promoting organic farming, HFP is a community farm in Raila village, some 200 km from this Uttarakhand capital, disconnected from cities and spread across five acres of land, isolated and situated at about 4,500 feet above sea level and has absolutely no electricity.

Still it is “heaven on earth’ for Pant, a 70-year-old retired brigadier, and those who visit it as volunteers from as far as Australia, Belgium, Croatia, Ecuador, France, Germany, Italy, South Africa, Switzerland and the US.

The idea is to live a simple life, where you recycle and harness natural sustainable resources to build a world, grow your own food, and thereby reduce the carbon footprint.

Pant got the idea after returning from a six-month fellowship for studying agro-ecology and sustainable food systems at the University of California, Santa Cruz. So, he started looking for a farm near his family home in Bhimtal.

In June 2011, the father-daughter duo acquired the farm with some financial help from friends who supported them.

The farm had been abandoned by its earlier owner. “It took us a couple of months to restore what all was left there, like turmeric, ginger, potatoes, onions, garlic and mango and lychee trees,” Richa said. 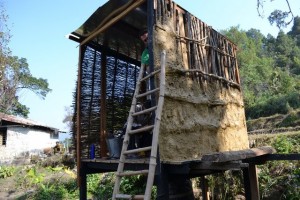 “People practised sustenance farming in mountains. They have small lands. So they grew a range of crops, i.e., from vegetables to pulses for family consumption. But, because people slowly began to find mixed farming insufficient to make ends meet, they shifted to mono agriculture.” explained Pant, who has been attached with the local community through his association with some NGOs in the region.

His experience had also formed the basis of why he decided to take up this project. “Mono farming ruined our food cycles. Farmers began to use pesticides and chemicals to increase the crop yield to sell more and compromised their healthy food for money.”

Another reason he gave for HFP is the increasing disconnect with nature among city dwellers. “They do not even know the source of their food. I want people to experience the joy growing one’s own food could give,” he says.

It is this reason which makes this project globally appealing. Elliot Mercier, a student from France, who learned about this project last August, explained: “In the West where I grew up, people tend to forget their essence and what life is all about. They search for happiness in buying a new car, a new house, a new dog – only to get rid of them a year later. It is sad to see that people don’t know what to do any more to be happy”.

So far, the volunteers (26 foreign and four Indian) who have visited the farm have successfully built up a walled compost toilet (which earlier had no wall) and a new and more spacious kitchen, apart from repairing and maintaining the existing shelter and farming area. All this despite being inexperienced in farming or building any structures.

“I know organic farming is not a profitable proposition and it is difficult for people to leave their existing lifestyles. All we are trying to tell people is that there can be an alternative, yet healthy and happy life” Pant said .
IANS