Shimla: Raising the credit limit to the priority sector by as much as 25 percent for 2012-13, the state focus paper for Himachal prepared by NABARD has set a credit target for banks at Rs 7865.03 crores for the next financial year. 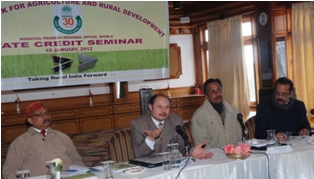 The state focus paper was released today at a seminar, presided over by finance secretary Srikant Baldi, at which public and cooperative sector bankers, RBI executives and Naresh Gupta, NABARD chief general manager for Himachal were present.

The paper assesses the credit potential for agriculture sector at Rs 3210.97 crore and for services, manufacturing, housing and educational sectors at Rs 4654.06 crore.

In the agriculture sector the a credit potential for crop loans has been identified at Rs 1741.81 crores, given the emphasis given to Kisan credit cards and a large number of farmers having availed it from banks. Crop loan potential alone constitutes about 54.24 percent credit potential in the agri-sector.

In view of the importance accorded to capital formation, Rs 1469.16 crore has been envisaged as term loan for investment credit activities in agriculture that is 33 percent more than the term loan target for the agriculture sector in 2011-12 annual credit plan. These sectors include minor irrigation, horticulture, storage and marketing yards.

Within investment credit to agriculture and allied sector, the highest potential has been identified for animal husbandry at Rs 289.17 crore followed by plantation and horticulture at Rs 175.70 crore, the focus papers reveals.

For the food processing sector a potential credit estimate of Rs 58.21 crore has been identified.

NABARDâ€™s state focus paper will form the basis of the annual credit plan for 2012-13 to be prepared by banks for the state, said an NABARD spokesman.

Gaps in infrastructure, such as irrigation, roads, animal husbandry sector etc have been identified, suggestions and action points have been made for banks and departments, the implementation of which would enable the achieving of enhanced credit flow by banks to the priority sector, he added.

Speaking on the occasion, Shrikant Baldi advised banks to enhance credit flow to agriculture as the percentage contribution of agriculture and allied sectors in the total State Domestic Product in the state was witnessing a declining trend.

NABARD chief Naresh Gupta asked banks to enhance credit-deposit ratio so as to achieve the potential assessed by NABARD.

He said that NABARD was partnering with the state government in development of rural infrastructure which would increase bank credit.

Besides other sectors, financial inclusion and strengthening the joint liability group movement would be priorities in 2012-13, said Gupta.