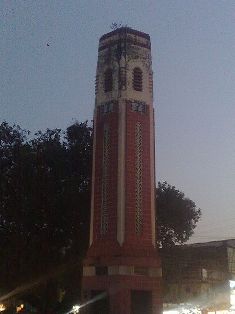 Dehra Dun : This capital of Uttarakhand was once known for â€˜chaiâ€™ (tea), choona (quicklime) and â€˜chawalâ€™ (rice). It also had the dubious distinction of having the only six faced clock tower in the world in which all the six watches showed different times. Not that they were synchronized to show different times of the globes, but inadvertently all or some of the watches were out of order and hence different times.

The tea garden that once could be seen in the outskirts of the Doon valley have given way to housing societies and colonies and almost all the tea garden have vanished.

The Majra area of the city which was synonymous to quality basmati rice is full of enclaves and limestone mining was banned by the Supreme Court in the 1980s. So neither â€˜chaiâ€™, â€˜choonaâ€™, nor â€˜chawalâ€™ remain the hallmarks of the city.

However, the six faced clock tower still commands its pride of place in the city and the six watches on the different faces still show different times.

But with the Nagar Nigam having given the task of repairing the watches to a local company, it is now hoped that all the watches will start ticking once again and show the same time, which may be the right time or not, depends. And the city will then lose yet another of its hall marks.

Going down memory lane, old-timers recall that the clock tower was constructed in 1947, the year India got independence and the design was taken from the six-faced clock tower of Kolkatta.

It was got constructed by a then elite of the city, Kanwar Anand Singh in the memory of his late father, Balbir Singh.

It was inaugurated in 1948 by the then governor of Uttar Pradesh (Uttarakhand was carved out of the state only in Nov 2000), Sarojini Naidu.

Time and again concern was expressed by the citizens of the fact that all the watches showed different times and efforts were made to repair the huge watches on the faces of the tower.

But each time after the repairs, the watches functioned normally only for a few days and then they were back to their uniqueness of showing different time.

The last time was in 2007, when the Nagar Nigan decided that enough was enough and entrusted one Ashok Engineering Company to repair the watches, which they did. But again the watches went to their old ways and the Nagar Nigam has once again asked the same company to put the watches in order, yet once more.

The work on the watches has started and hopefully all the six will show the same time.

However, even the company repairing the watches claims that it will again be only for a short time.

â€œAll the parts of the six watches are in the open inside the tower and hence suspect to the vagaries of nature and dust. Dehra Dun also gets extensive rains and the moisture also tells on the partsâ€ said Ashok Khanna, owner of the firm undertaking the repairs.

The positive side, Doon will retain its hall mark of having the only six faced clock tower in the world in which all the watches show different time.