Dehradun: Even as there is global concern over the dwindling number of tigers the world over, Uttarakhand will have the dubious distinction of being the state where the numbers of feline in the wild are not only decreasing, but the state forest authorities are not able to control the number of deaths due to poaching and other causes. 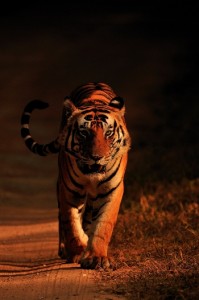 What else could be the reason to account for the fact that the state has lost 23 tigers in the Corbett National Park and other forests in the last one year alone.

The last feline to die was reported to be a 10-year-old male whose carcass was found in Daichouri range of the Ramnagar forest division on Saturday morning.

Though the forest authorities ruled out any foul play and attributed the cause of death as a fight between two males over territory, but the large pool of blood at the spot, number of injuries on the body and a broken right paw indicate that it could also have been beaten to death by residents in the periphery villages.

The reason for this is attributed to the fact that the other tiger involved in the fight must also have been seriously injured, but the forest authorities do not claim of sighting any wounded or injured tiger.

It is another story that they may have not made the required efforts to locate the injured tiger.

On Dec 13, two tiger cubs, a male and a female about one-and-a-half years old were found dead in the Kilpura range of Terai east forest division whereas the very next day that it Dec 14, the carcass of a one month cub was also found in the Dhela range of the Corbett.

Park authorities claimed that the cub may have been deserted by its mother and it died of the cold.

And one more was added to the 106 leopards killed in the state, when the army authorities found the carcass of the leopard in a snare and informed the forest authorities who took possession of the body.
The leopard was said to be about three years old.

Even as the chief wildlife warden claimed that it was a matter of concern that there were such a large number of deaths of felines, specially tigers.

He hastened to add that an action plan was being formed, which would analyse the reason for the deaths and action that can be taken to prevent them in the future.