Dehra Dun : Succumbing to the indefinite hunger strike undertaken by Shivanand Saraswati, founder head of the Matrisadan Ashram in the holy city of Hardwar, which continued till the 11th day, the Uttarakhand government Tuesday banned quarrying in the Bhogpur and Bishanpur ghats of the river Ganga. 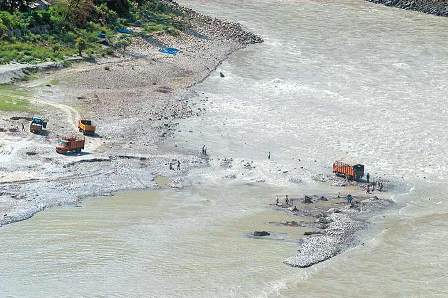 Following the orders issued by principal secretary Rakesh Kumar banning mining the two ghats, which brings to an end mining in Hardwar district in the river Ganga, Shivanand Saraswati broke his fast-unto-death by accepting a glass of juice. However, his major demand of banning quarrying along the Ganga in Uttarakhand would be looked into.

Quarrying in the Ganga would be studied by a special committee which would report on its environmental impacts on the river and a report would be given . Till such time that the report is received quarrying operations would come to a stand still and depending upon the report, further course of action would be decided by the state government.

Following the ban imposed by the state government, the permission given by the Garhwal Mandal Viksas Nigam and the Forest Development Corporation, both public sector undertakings, has been put on stay. It was only after a copy of these orders were shown to Shivanand Saraswati, that he came out of his barricaded room and broke his indefinite hunger strike.

It may be recalled that Shivanand Saraswati had started his indefinite hunger strike to â€œsave the Ganga as life of the river was more importantâ€. Despite repeated requests by revenue minister Diwakar Bhatt and senior district officials, the saffron clad swami refused to break his fast till his demand was met.

In fact, when the Hardwar district administration lodged an FIR against him under section 309 IPC (attempt to commit suicide) and threatened to take him to hospital forcibly to feed him, the swami barricared himself into a room and locked it, so that the officials could not enter .