Chandigarh: Estranged nephew of chief minister Prakash Singh Badal and founder president of Peoples Party of Punjab (PPP) Manpreet Singh Badal along with supporters was taken into preventive custody here today, while they were on their way to hold a day long dharna in support of Anna and his crusade against corruption.

Manpreet claimed that the party had first got permission for holding the peaceful protest but it was cancelled yesterday.
For holding a peaceful dharna in support of Anna, we were moving to Sector 17, when police prevented us from reaching the venue, reports quoted Manpreet before he was arrested. 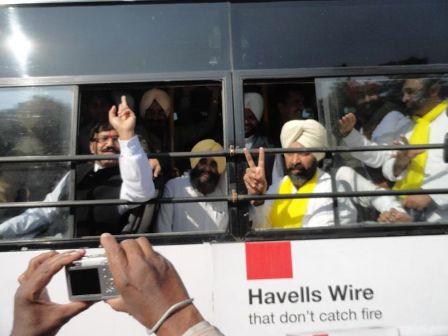 Others who were arrested included Sardara Singh Johal a former vice chancellor of Punjab Agriculture University, Kushladeep Singh Dhillon a former MLA and several others including women.