Khrew (Jammu and Kashmir) : For 40-year-old Bashir Ahmad Sheikh, it doesn’t matter whether the art of weaving the traditional Kashmiri firepot, the kangri, was introduced here during Mughal rule or earlier. For Bashir, it is the only livelihood he has.

“I learnt the art from my father and he perhaps from his father. All I know for sure is that making a couple of kangris daily earns me my daily bread,” he said. 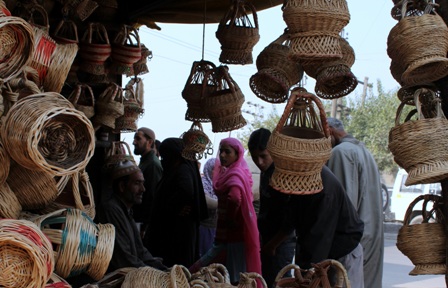 The severe winter cold under which the Valley is reeling at present has come in handy for this hardy soul.

“Making an ordinary kangri takes around three hours. I work for nearly eight hours these days which enables me to make two of them a day.

“Each kangri sells for around 150 rupees ($3). Yes, the better ones cost much more. I buy the earthen firepots from the local potters and then weave the willow basket around them.

“The willow twigs are collected from the forest behind our village, but indiscriminate grazing by large flocks of goats and sheep is destroying the willow bushes nowadays,” Bashir said as he carefully folded the willow twigs around the earthen firepot.

As the power supply remains erratic in the Valley, the kangri continues to be the best bet for the locals to brave the severe winter cold.

The kangri is filled with smouldering charcoal and worn under the traditional tweed overgarment, the Pheran.

“Life without the kangri and the Pheran is unimaginable in the Valley. I head a joint family of 10 and each one of us has a Kangri of our own,” said Master Habibullah, 64, who lives in north Kashmir’s Chanduna village.

Historical records are unclear about the origin of the kangri.

Some historians maintain that the Italians in the retinue of the Mughal emperors visiting the Valley taught Kashmiris the art of making kangris. Others argue the kangri had been in use in Kashmir much before Mughal emperor Akbar conquered Kashmir in the 16th century.

Sold in various colours and sizes, the kangris are marketed in all the Valley’s big and small towns.

“The best ones still come from central Kashmir’s Charar-e-Sharief town. In the past, the kangri would form an essential part of a bride’s dowry. Those kangris came from Charar-e-Sharief,” said Muhammad Sidiq, 48, who sells kangris in Srinagar.

Doctors have been warning the people against excessive use of the kangri, especially close to the bare skin.

“Excessive exposure of the skin to the heat of the kangri often results in serious burns. One has to be very careful and not use the firepot too close to the bare skin”, medical practitioner Kaisar Ahmad said .

But, given the deteriorating electric supply scenario in the Valley, where curtailments are announced almost on a daily basis, the kangri and the Kashmiri continue to remain inseparable during the bone-chilling winter cold.
IANS