Shimla : Oh, for a white Christmas and New Year! That is now the feeling in Shimla where snow on Christmas has become a thing of the past.

Snowfall has been eluding the town on Christmas since 1991 when 49 cm of snowfall fell on Christmas’ Eve. And except in 2010, there has been no white New Year’s Eve in Shimla in the past eight years.

Deforestation is blamed for the change in Shimla’s climatic conditions.

A recent study done by the Met Department has confirmed fears. The study, conducted by Manmohan Singh, director of Shimla’s Met office, and S.C. Bhan of the Delhi Met department, examined the snowfall trend in Shimla in the past 20 years. They concluded that Shimla’s harsh winter, which normally commenced in November and ended in March, has declined after the mid-1980s.

“The snowfall pattern has undergone a drastic change after 1991 with the snowing days shrinking at a rate of 11 days per decade,” Singh said.

According to the study published in the latest edition of Journal of Agro-meteorology, the decadal average overall precipitation from December to March has declined from 283.9 mm (1991 to 2001) to 235.1 mm (2002 to 2010-11). The quantum of snow has come down and most of the precipitation was in the form of rain. 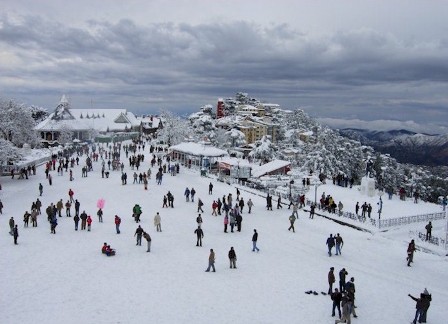 Even the percentage of snowfall to the total precipitation during this period has declined to 30 from 39.

The snowfall trend has also changed. “The snowfall is being recorded more in February in Shimla than in December and January,” said the study.

The average number of days with snow in the season has come down to 8.2, with a maximum of three days in February. The highest number, 20 days, was recorded in the 1994-95 season.

But while Shimla’s climate has changed, neighbouring hill stations like Kufri, Fagu and Narkanda are still experiencing regular and timely snow.

Environmentalists blame deforestation for the change in Shimla’s climatic conditions.

“Over the years, we have observed that the snow cover has declined massively and is melting at a faster rate than expected. This means there is an overall increase in temperature,” J.C. Kuniyal, senior scientist of the Kullu-based G.B. Pant Institute of Himalayan Environment and Development, said .

He attributed the rise in temperature to excessive emission of carbon monoxide from vehicles and denuded hills.

Octogenarian skating champion Madan Lal Sharma, who has been a Shimla native for more than 75 years, said : “Earlier, the children used to take out sledges with the onset of winter in November. Sledging on the snow-laden streets was once their favourite pastime. It’s now only in the memory albums.”

College student Pallvi Gupta said she had never seen snow on Christmas. “Mostly, we just satisfy ourselves by admiring the snow-clad peaks from Shimla’s historic Ridge. The days are not far when we will have to visit the higher reaches to have a feel of snow.”