New Delhi : In a last ditch effort to save Bhagavad Gita from a ban, as reported earlier, aghast Hindus in Russia appealed to the Siberian court to seek the views of the nation’s human rights panel on the religious text and preachings, before pronouncing its verdict. 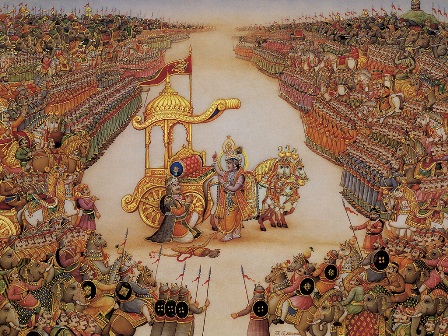 Following their last-minute plea, represented by their advocate Mikhail Fralov, the court in Tomsk city in Siberia has given the human rights panel 24 hours to come with its deposition, following which it will deliver the verdict Tuesday.

As from Moscow last week, the court — which has been hearing the case filed by the state prosecutors since June — was otherwise ready to deliver its judgment Monday.

After media reports , parliamentarians across the political spectrum Monday created a ruckus in parliament and asked the government to ensure the religious rights of Hindus in Russia are protected.

Biju Janata Dal leader Bhratruhari Mahtab pointed out in the Lok Sabha Monday that the Bhagvad Gita was facing the prospect of being branded as “extremist” literature and banned there.

He was joined by a host of MPs, including Rashtriya Janata Dal’s Lalu Prasad.

The prosecution in Russia also wants the Russian translation of “Bhagavad Gita As It Is” by A.C. Bhaktivedanta Swami Prabhupada, the founder of the International Society for Krishna Consciousness (Iskcon), declared illegal, claiming it spread “hatred”.

In view of the case, Hindus settled in Moscow, numbering about 15,000, and followers of the Iskcon movement in Russia have asked the Indian government to intervene diplomatically to resolve the issue in favour of the scripture, an important part of Indian epic Mahabharata written by sage Ved Vyas.

Iskcon followers in Russia have also written a letter to the Prime Minister’s Office in New Delhi, calling for immediate intervention, lest the religious freedom of Hindus living there be compromised.

“When the matter came up before the court, our advocate pleaded to pronounce the verdict after hearing the view of Russia’s Human Rights Committee on what it thought of Bhagavad Gita and of Hindus’ religious rights,” said Sadhu Priya Das of Iskcon.

“The court accepted the plea and has given 24 hours for the committee to come with its deposition before it,” Das, who is a devotee at a 40-year-old Krishna temple in central Moscow, said over the phone from Moscow.

“This is our last ditch effort to convince the court to see our point of view and uphold Hindus’ religious rights. The verdict will now come out on Tuesday,” he said.

Advocate Fralov, speaking over phone from Tomsk where he had appeared in the court hearing earlier, said the defence sought the deposition of the human rights panel in the case because they wanted to use all the legal options to defend the Gita.

“One of the last few options was to get the Human Rights Committee involved in the case, so that the rights of minorities get highlighted before the court,” Fralov said.

He also said Hindus and Krishna devotees in Russia had much earlier represented to the human rights panel asking it to give its views before the court, which it agreed to. The committee, later, also wrote to the Tomsk court that it would like to present its views on the case, which the court accepted.
IANS