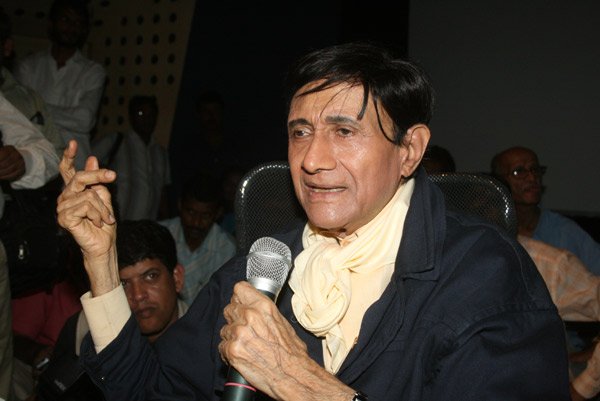 Mumbai : From “Baazi” in 1951 to “Chargesheet” in 2011, it was an untrammeled joyride through six decades of Bollywood. It’s curtains for the ageless Dev Anand, who oversaw the growth of the Hindi film industry from the black and white era to technicolour, and leaves behind a unique legacy of a star who had moved way beyond his cinematic works.

He acted, he directed and produced… almost till the end with his last film “Chargesheet” being released this year when he was all of 88 and still raring to go, as ebullient and ageless as ever. Reviewing “Chargesheet”, a well known critic put against the rating “irrelevant”. It truly didn’t matter by then whether the film was good or bad. The much loved legend had given so much through the years that he was forgiven almost everything.

Dev Anand epitomised the suave, urban gentleman who romanced his way through generations of heroines — from Nalini Jaywant to Zeenat Aman.

And of course, his charming persona is incomplete without a mention of his hairstyle, the puff a la Hollywood legend Gregory Peck.

He ruled the black and white era with movies like “Munimji”, “CID” and “Hum Dono” and then moved into the coloured age with classics like “Jewel Thief” and “Johny Mera Naam”. He provided the launch pad for some of tinsell town’s most remembered head-turners like Zeenat Aman and Tina Munim.

He acted as the lead in more than 110 movies. His 2011 release “Chargesheet”, in which he acted and directed as well, became his swan song. The prolific star also released an autobiography “Romancing with Life” in September 2007.

Born on Sep 26, 1923 as Dharam Dev Pishorimal Anand in Gurdaspur district of then undivided Punjab to an advocate father, he graduated in English literature from the Government College, Lahore (now in Pakistan) before moving to the city of dreams Mumbai, where his elder brother, late filmmaker Chetan Anand, was already finding foothold, to fulfill his acting dreams.

Like others, Dev Anand too had his share of struggle before embarking on his celluloid journey. He worked as a military censor office at Churchgate at a salary of Rs.160 and even joined his brother, Chetan Anand, as a member of the Indian People’s Theatre Association (IPTA).

Destiny, however, had something else in store for him and soon he was offered a break as an actor by Prabhat Talkies to star in “Hum Ek Hain” (1946). It was while shooting for the film in Pune that Dev Anand met Guru Dutt – and was born a friendship destined for greatness.

Two years later, the turning point in his career came when he was offered his first big break by Ashok Kumar in Bombay Talkies’ hit 1948 movie “Ziddi”.

As it happened, Ashok Kumar spotted Dev Anand hanging around in the studios and picked him as the hero for the film.

A genius in his own right, Dev Anand turned producer and launched his production house Navketan in 1949. As a prior commitment, he asked Guru Dutt to direct the banner’s first outing – crime thriller, “Baazi” (1951), which made Dev Anand an overnight star and he remained a star till his last breath even six decades later.

His good looks turned him into every girl’s dream man, but he himself fell for his co-star and the superstar of the era, Suraiya. Their romance blossomed but met with a tragic end when Suraiya’s grandmother didn’t approve of their alliance and they were forced to part ways.

Picked from Hollywood actor Gregory Peck, Dev Anand’s rapid style of dialogue delivery, his array of hats, jackets and mufflers, and a penchant for nodding while speaking became his trademark.

The style was widely imitated even while some cast aspersions on his acting abilities. He proved naysayers wrong with a Filmfare best actor award for “Kala Pani” (1958).

His first colour film, “Guide”, which was directed by his brother Vijay Anand, with Waheeda Rehman in 1965, became a cult movie and is remembered as one of his best works.

He was also the first Hindi film actor who campaigned against the then prime minister Indira Gandhi by launching a political party called the National Party of India, which he later disbanded.

After the 1978 hit “Des Pardes”, which introduced Tina Munim, his films failed to create a mark. But he was never one to lose heart. And continued making films with energy and zeal.

Dev Anand’s zest for life will always be remembered.

He is survived by wife, a son and a daughter.