Dehradun : The airport at Jollygrant about 25 kms from the city and the only one in Uttarakhand where big planes can land, may have solved the problems of those wanting to make a quick trip to Delhi, but it leaves much to be desired as far as facilities for those who have come to see off their nears and dears.

Under the operation of the Airport Authority of India, it has undergone a sea change from the days of yore, when one could walk through the barbed wires that made the fencing and on to the runways.

However, then it had just one flight coming in, and was mostly used by the high profile swamis and godmen coming in their private planes to the adjoining holy city of Rishikesh, where they have their ashrams.

In fact, when the airport was not even made, the then much hyped swami, Maharishi Mahesh Yogi, who is better known for having publicized transcendental meditation and was also visited by the likes of the once most popular group, Beatles and also Mia Farrow, used to come to Rishikesh, where he had an ashram spreading over acres of land in an amphibian plane, which landed on the Ganga. 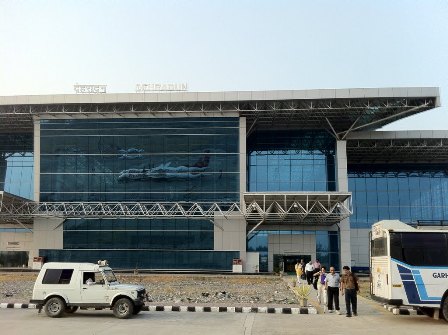 The need for the airport was felt because of the number of swamis visiting their ashrams in the twin holy cities of Rishikesh and Haridwar, and also a large number of their devotees from India and abroad.

As their numbers increased over the years, emphasis was laid on modernizing it to international standards, which has been done.

However, for the entry ticket to the airport, there is no counter. One has to search for the man who sells the tickets at Rs 30 per head. And it is only after a lot of questions and looking that one can identify the man and ask him for the tickets.

Why has he not been given a stall within the airport premises, as is in the other airports of the country, despite the fact that there are empty cabins inside, one fails to gather.

The ticket seller not wanting to come on record, himself confessed that he had a hard time as with about eight flight operating from the airport he is on his feet most of the time.

There is no place for him to sit, and should he have to answer the call of nature, those wanting to buy tickets can just keep looking.

Besides the car parking facilities are not only very highly priced, but it appears that all importance has been given to the airport alone and not its immediate surroundings.

The parking place is littered and the work done so shabby that concrete is falling apart and pot holes have become the order of the day. There is also no facility for calling oneâ€™s vehicle from the airport to the car parking, which is some distance away.