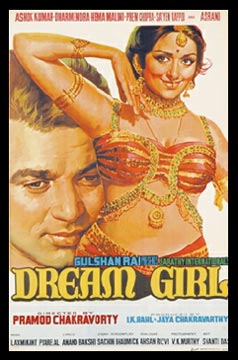 Mumbai : Evergreen actress Hema Malini says her ‘Dreamgirl’ tag is not for nothing — she worked hard to achieve it and says it has taken her a lot to maintain it over her four decade-old film career.

“The ‘Dreamgirl’ title has been with me for a long time. My name got attached with it many years back, but I worked hard to achieve it, to maintain it,” Hema said at Colors’ Golden Petal Awards ceremony here Monday night.

The 63-year-old kept true to her ‘Dreamgirl’ tag when she came on the stage in a golden sari with the “Dreamgirl” song playing in the backdrop. Her poise and grace could give any new age actress a run for money.

However, Hema clarifies her hard work was never aimed at earning any title.

“We (actors) don’t work hard in films to earn titles like this ‘Dreamgirl’ one. We work hard to get the artist out of us. That’s all,” said the actress, who earned fame with films like “Sholay”, “Seeta Aur Geeta” and “Johnny Mera Naam”.

At her age, she is fit as a fiddle, with glowing skin — and when TV actors Apara Mehta and Himani Shivpuri asked her about her fitness secret, she said: “You should all dance! And by dance I mean do classical, traditional Bharatnatyam, not ‘Sheila ki jawaani’! And drink 17 bottles of water everyday!”

Now that’s quite a tip from the evergreen diva herself, who recently directed “Tell Me O Kkhuda” to relaunch her daughter, Esha Deol in the film industry.
IANS