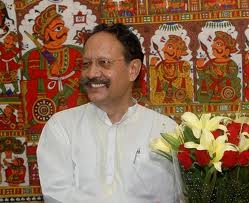 Dehra Dun : By introducing the Lokpal Bill in the Uttarakhand vidhan sabha and getting it passed may have made Uttarakhand chief minister B C Khanduri the poster boy of Anna Hazare, but the public resolve made by him for ridding the malaise of corruption that has infected the very interiors of this tiny mountain state has received a huge setback.

The vice chairman of the state run undertaking Garhwal Mandal Vikas Nigam (GMVN), Raghunath Singh Negi has put in his papers on the issue of corruption. Negi told scribes here while the issue of making temporary employees of the Nigam permanent was also an issue but more importantly was the fact that former MD, GMVN V R C Purshottam, against whom he had recommended action for the latterâ€™s alleged corrupt practices, had been posted to the plum post of vice chairman of the Mussoorie-Dehra Development Authority (MDDA).

The resignation comes at a time when the chief minister has been proclaiming at various public functions that there has been a definite shift for the better eversince he took charge about two months back. However, his announcements have apparently been more for public consumption and as far as ground realities go, the very fact that the alleged corrupt are being awarded plum positions indicates the contrary.

It is not only this, Khanduri, when he took over as chief minister earlier in 2007 had set up a commission to look into 56 acts of alleged omission and commission during the tenure of his predecessor Narain Dutt Tewari who headed the Congress government. After he was made chief minister against after a gap of over two years replacing Ramesh Pokhriyal, it was expected that the commission would come out on its report on the allegations.

But this was not to be. The one-man Commission, rather than submitting its report in the over four years that have passed, also preferred to resign than give its report. While the head of the Commission, former justice M M Ghildiyal, may have cited being pre-occupied and burdened with work as the reason to quit, the question doing the rounds is why did he take up the assignment at all earlier, if he was so occupied and over burdened with work.

There are rumours in political circles that the present BJP government does not have the political will to ensure that a report is out on the allegations and it is made public. This is despite the fact that it recently handed over 17 allegations to the state CID against the N D Tewari government, to counter the issue of corruption in the previous BJKP government headed by Ramesh Pokhriyal.

In fact, there have been repeated demands, not only by the opposition Congress, but by other sections also that the number of alleged scams that took place under the Pokhriyal government be handed over to the CBI, but though Khanduri has been taking the stance that the guilty will not be spared, despite their position, he has conveniently looked the other way as far as the CBI probe is concerned.