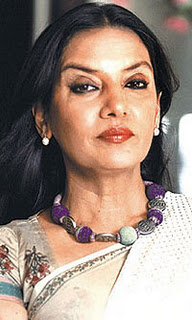 Mumbai : Shabana Azmi, who has been part of the Indian film industry for the past 35 years and has worked in about 120 films, says her most memorable role is not from a film, but a play.

“I have been working for the last 35 years and I have played a lot of different roles. But the most satisfying experience for me was the character of Amrita in the play ‘Tumhari Amrita’ written by Javed Siddiqui,” the actress, who is also a social activist, told reporters at a book launch function here.

Besides Javed Siddiqui, Shabana, who is married to well-known writer Javed Akhtar, is also a huge fan of Gulzar.

“I consider Gulzar a fabulous lyricist and a dialogue writer. I want him to make a film and give me an opportunity to work with him again,” said the actress who worked with the writer-lyricist in his directorial venture “Namkeen” and “Libaas”. “Libaas” has yet to see the light of day, but its songs were released and some of them like “Khamosh sa afsana pani pe likha hota” and “Silli hawa chhoo gai” are still played and tops music lovers’ favourite list.

The 61-year-old has an interesting body of work that boasts of films like “Ankur”, “Nishant”, “Masoom”, “Mandi”, “Fire”, “Godmother” and “Morning Raga”.

Recently she made her debut in the Pakistani cinema with “The Dusk”. Directed by Zeeshan Kazmi, it is based on the issue of missing people in Pakistan.
IANS