New Delhi : Former telecom minister Sukh Ram was Saturday attacked by a man in the Rohini courts complex here after his sentencing in a 1996 telecom scam case.

Harvinder Singh slapped and kicked Ram just as he came out of the court. He was detained by police and taken to Prashant Vihar police station. The octogenarian former union minister was unhurt in the attack. 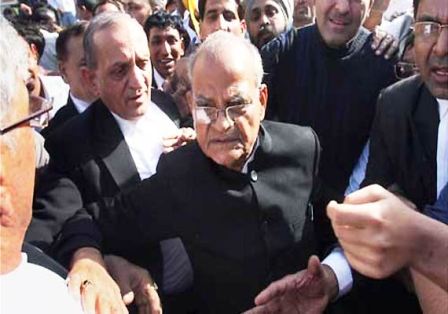 According to police, Singh is seen regularly in the court premises. The motive behind the attack is being investigated.

The 84-year-old Sukh Ram was held guilty of misusing his official position when he was in the P.V. Narasimha Rao cabinet in 1996.

He was convicted Thursday by the court which found him guilty of accepting a bribe of Rs.3 lakh from a private firm 15 years ago. The court Saturday sentenced Sukh Ram to five years rigorous imprisonment and imposed a fine of Rs.400,000 on him.
IANS