Shimla: Raising conservation concerns for preserving the habitat of snow leopards, – the rare big cats that roam across some of the coldest zones on earth, wildlife wardens in collaboration with Mysore based National Conservation Foundation (NCF) have drawn up plans to set up a research centre in Spiti valley.

Chief wildlife warden AK Gulati says, â€œof the funds received under â€˜Project Snow Leopardâ€™ from central authorities, one of the first tasks is to set up a research center at Kibber, in Spiti.â€

He said that with the snow leopard being declared the state animal a lot of conservation interest had been generated to protect it. In the first year Rs 30 lakhs is proposed to be spent on the centre.

Classified as an endangered species in the IUCNâ€™s Red List, the Rs 5.5 crore centre funded snow leopard project spread over Jammu and Kashmir, Uttarakhand, Sikkim, and Arunachal Pradesh and supported by Wildlife Institute of India and NCF this is an Indian initiative for strengthening wildlife conservation in Himalayan altitudes.

Yash Veer Bhatnagar, a senior NCF scientist and a leading authority on snow leopard conservation says, â€œthe research centre would draw from telemetry experiences in Mongolia where such a facility has been set up. 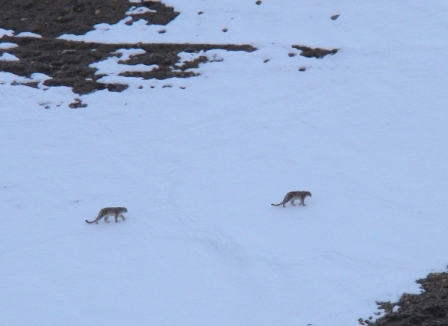 The foundation, which has been working for over a decade has studying the animal in the wild around Kibber village in Spiti, has successfully used camera traps to photograph the deep furred solitary big cat with a long bushy tail in the wild.

Though the number of snow leopards in Indian Himalayas is estimated at 400 to 700, however, Gulati mentions that a survey in 2004 had come up with evidences of 35 of them in Himachal. â€œEvidences of 24 of them being in Spiti valley and 8 in Pangi-Lahaul valley came up in the survey, he said.

With studies conducted in Himalayas suggest a home range of a snow leopard between 20 to 100 square Kms but advanced GPS collar technology studies in Mongolia and Pakistan have estimated a home range of over 1400 to 1600 Kms, changing the very perception of their range sizes and potential population estimates dramatically, notes the snow leopard conservation management plan.

Proposed to be set up at Kibber, one of the highest villages in Spiti, the research center would help conservationists and wildlife wardens to do a comprehensive long term radio collaring study on snow leopards and their prey.