Lucknow: In a move that Chief Minister Mayawati said was inspired by B.R. Ambedkar, the Uttar Pradesh cabinet Today decided to divide the state into four: Purvanchal, Pashchim Pradesh, Bundelkhand and Awadh Pradesh.

While Mayawati had written to Prime Minister Manmohan Singh on the issue, her cabinet took a formal decision to take it up as a resolution in the state assembly during the winter session beginning Nov 21.

“We will get a resolution passed by the assembly to divide the state into four smaller states during the coming winter session to be opened on Nov 21,” Mayawati said at a press conference here. 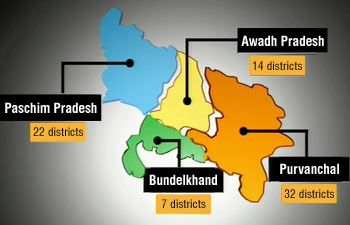 After the resolution was passed by the assembly, it would be sent to the central government that would be required to table it before parliament where it would have to be passed, Mayawati said.

Explaining the rationale behind the move, she added: “As we all know, UP is the country’s most populous state with the population shooting up to nearly 20 crore, which means that 16 percent of the country’s population lives. It also has a gigantic area of 240,000 sq km and that is what makes it unwieldy.”

Only a division can solve the problems and remove the inherent imbalances, the chief minister said.

“The move would fulfil the much-awaited aspirations of the people living in each of the regions that have suffered on account of neglect and apathy of successive governments – either led by the Congress or the Bharatiya Janata Party (BJP).”

Accusing national governments of apathy towards her state, Mayawati said: “Even though UP had given the maximum number of prime ministers to the country, none cared to do something concrete for appropriate development of the state.”

She claimed that hers was the only government that had shown sincere interest in comprehensive development.

“Soon after we came to power on our own strength in 2007, I not only wrote to Prime Minister Manmohan Singh seeking a special economic package of Rs.80,000 crore for the development of the backward regions of Purvanchal and Bundelkhand but also met him personally – to no avail.”