Srinagar: A lone women sitting on the two stone, verandah is just off from sweeping her unmarked lawn outside her dingy room in Leper colony Lal Bazar. Watching Khalida -40 from a distance, she utters something to a passerby who is few yards away, but she struggles to put her words across.

Again she tries, but again a failure is there. Some years back there was a family, a world of her own, when she would talk and others would listen. Her dear ones would wait for hours to have a chat with her. Khalida is suffering from Lepromatous, diseases which produces lesions on the skin and is the most severe one producing large disfiguring nodules.

With tears in her eyes, Khalida recalls how she lived peacefully with her husband, for a short duration of her time. But now she is desolated and abandoned. â€œI was very excited about my marriage; I got married to the man of my choice. I had waited for years for marriage. I thought we have now happy days. Everything will be alright now butâ€, she pauses and takes deep sighs. But now for her times have completely changed, nobody from her family visits her.

After coming to this place thirteen years back, her world has a new name, leper colony. Hailing from the mountainous region of the state, Kargil, Ladakh, Khalida sometimes lays unconscious for days; she gets medicine from the charities given by the people. She lives alone with nobody to care, to talk and to share.

Living in a land of people like her only, they are the ones who provide food to her. â€œI always sit on the verandah of my room just to show people that I am alive and when people donâ€™t see me here, they come to enquire about me, this is the only way I surviveâ€, she says.

On the banks of Dal Lake, this colony is located in the Bhagwanpora of Lal bazaar area of Srinagar city. This hospital was built during British rule in Kashmir 200 years ago. 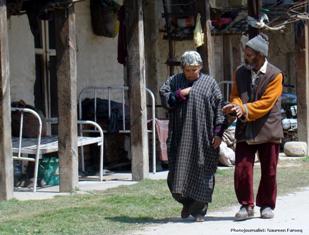 Like her, there are more than 80 families that are living their life in the surroundings of the valleyâ€™s only leper hospital and is named as the leper colony. This small world of lepers is surrounded by a larger myth in the society.. â€œThe people outside the boundaries of this hospital treat us as if we are aliens, we are just ill and not any ghosts that they donâ€™t talk with usâ€, she laments.

Leprosy, derived from the French word “leper” and from the Greek word “lepros” means scaly, referring to the scales that form on the skin in some of the leprosy cases and that has been known since biblical times.

Within few years of her marriage, Khalida had a child but now it has been thirteen years that she has seen her baby. â€œMy eyes always want to have a look of my baby onceâ€, she sighs.

But now for her, the times have changed. Whatever happened with her, she calls it a destiny, she least cares for anything now except for her child.

â€œMy only wish is that my child should remain healthy and live longâ€, she prays. 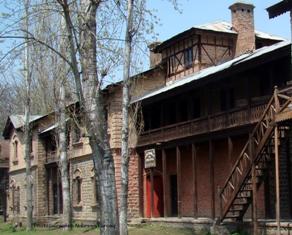 This is not the only case in this leper colony, there are more than hundred patients who have been abandoned from their families and what they yearn for is the only glimpses of their families. They are not only fighting a war with the disease but also with the society that too within the society.

Meanwhile Khalida, while talking about her family, tears trickled down her wrinkled cheeks, wishing that her only child should never come to know about her.

Khalida is in her last stage of leprosy, waiting for death to embrace her, which she says is the only way to get out of here.

Zubair Bhat is a Srinagar based freelance journalist