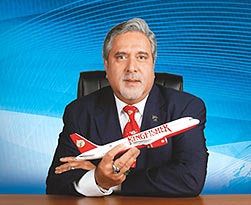 New Delhi: Defending his Kingfisher Airlines which has cancelled a number of flights this week while struggling with a pilot exodus and huge debts, promoter Vijay Mallya Saturday asked whether it was his carrier’s duty to fly on non-profitable routes in a heavily taxed environment.

“Is it Kingfishers duty to fly on loss making routes, when state governments tax heavily? Or should we be financially prudent and fly profitably,” Mallya posted on micro-blogging site Twitter account.

“Every government has gone out of the way to support airlines and connectivity. In India airlines are over taxed and over charged, wonder why?,” he tweeted.

Mallya’s tweet comes even as the airline curtailed 40 flights for the fifth consecutive day, a move, the company said, was taken to rationalise route plans and improve yields.

“Kingfisher Airlines has rationalised its network to offer maximum and seamless connectivity. As per the revised schedule, it will offer 300 daily flights connecting 54 cities as compared to its previous schedule of 340 flights,” Sanjay Aggarwal, chief executive, Kingfisher Airlines said in a statement Friday.

But the damage was already done as the company’s stock had plummeted to a new low Friday after the aviation regulator issued a notice to the carrier seeking an explanation on the flight cancellations it has resorted to apparently to cut costs.

The company’s stock at the Bombay Stock Exchange (BSE) declined over 19 percent in early trade to a new low of Rs.17.55. It however pared some of the losses and closed the day at Rs.19.65, down 9.45 percent.

Apart from the stock market losses, the airline also owes huge amounts to oil companies, the Airports Authority of India and private airport operators, the GVK and GMR Groups. The airline has not posted any profit since its launch five years ago, and reported a net loss of Rs.1,027 crore last fiscal and Rs.263 crore in the last quarter.

Also, the airline saw about 100 pilots quitting recently. The company however said such attrition levels were normal for the aviation business.

“No Kingfisher flights have been cancelled due to lack of pilots or other staff. The attrition of 100 pilots did not happen overnight,” Aggarwal said adding that the airline has sufficient number of pilots and a robust pipeline of new pilots.

Meanwhile, Civil Aviation Minister Vayalar Ravi said that the government was monitoring the situation and that he has spoken to the finance and petroleum minister about the company’s issues.

“He (Mallya) has met me and explained the situation. He has not been able to get financing from banks. So, I have had a word with the finance minister about it,” Ravi told reporters here Friday.

According to Ravi, he has also spoken with Petroleum Minister S. Jaipal Reddy, whose ministry controls the three OMCs to provide relief to the cash-strapped airline.

“It (Kingfisher) is in an unfortunate situation. As the government we don’t want the airline to close down. We want them to fly,” Ravi added.

On the question of Kingfisher getting a similar bailout package like Air India, the carrier said it has not asked for any package but only requested the lenders to increase the borrowing limit.

“Kingfisher has not made any bail out request to the government. We have only asked our banks for an increase in limits due to significant increase in operating costs,” Aggarwal added.