New Delhi : With style icons like little Suri Cruise and Harper Seven being talked about in India and movies, advertisements and TV reality shows catering exclusively to children, the kidswear market is the next big thing to watch out for, says leading brands and designers.

Taruna Vasu, faculty, Pearl Academy of Fashion, Jaipur, said: “The kidswear segment in India is touted to be the most promising segment in apparel. It is growing at nearly 14-17 percent and is estimated to be worth Rs.38,000 crore ($7.5 billion).”

“The good news for the branded children’s wear segment is that though presently it is worth Rs.3,000 to Rs.4,000 crore, it is growing at more than 25 percent,” Vasu added. 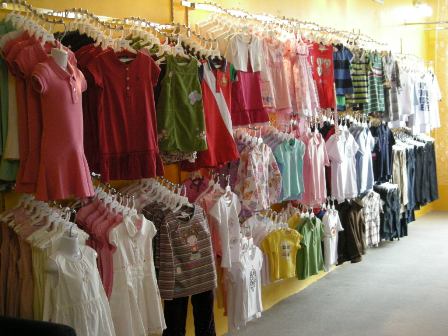 The growth rate has worked as an inspiration for several brands and designers. Gauri and Nainika, Gaurav Gupta, Malini Ramani, Ritu Kumar, Namrata Joshipura, Sonya Vajifdar and Payal Singhal are among those who have already forayed into this sector.

“Luxury brands are launching kids’ lines because of the tremendous growth potential in the area. Moreover, this area is less likely to be affected during economic and financial hardship. Even during the recession, parents were willing to spend more on their children than on themselves,” said Rahul Anand who runs a label called RNA with partner Anushka Laul.

Awareness is playing an important role, points out Monika Jain of the label Beebay.

“With the growing influence of internet, social networking sites and increasing connectivity, children have become aware of fashion. There is definitely an influence of Hollywood celebrity kids like Suri Cruise and Harper Seven, international movies and serials and children movies,” said Jain.

Hollywood star couple Tom Cruise and Katie Holmes’ daughter, Suri, is seen as a trendsetter. From wearing designer clothes to heels and matching bags, the five-year-old is already considered a fashion icon.

Recently she stepped out carrying a metallic designer bag worth 540 pounds and her wardrobe is reportedly worth a staggering two million pounds.

The same holds true for Harper Seven, the only daughter of ace footballer David Beckham and wife Victoria.

Brands like Liliput, Gini and Jony and Catmoss have been producing fancy and trendy stuffs for some time now.

Talking about the change, Anil Lakhani, director of Gini and Jony, said: “Consumers were not as brand conscious in the past as they are today. Traditionally, they shopped from the unorganised retail outlets, which is not the case today. Now a brand plays a very important role in their buying behaviour with respect to selection of clothes.”

“The Hollywood influence is always a big factor,” he admits.

Designer Payal Singhal recently launched her kidswear line and she was surprised to see the demand.

“We recently launched our kidswear line and it was sold out. So I am assuming people are willing to spend on the kids line. I think the demand for clothes is more for Western garments, but there is still a huge vacuum for good Indian clothes for kids,” she said.

When asked about the most popular style, designer Sonya Vajifdar said: “Kids (girls) love frills and ruffles and glitter, but you need to know when to hold out on it. Frocks in vibrant colours like pinks, purples, blues and yellows with frills, ruffles, and playful cuts are making trends.”

Kids fashion has also percolated down to Tier II and Tier III cities like Dehradun, Chandigarh, Pune, Nashik and Indore.

Anand says when it comes to pricing it is necessary for brands to keep rates minimal so that people can ask for more.

“There are two important factors to be considered while making a kids apparel brand a success – variety and price. Kids grow out of their clothes fast; hence it is important that the range should be reasonably priced. In India, the average price range for casual wear is Rs.1,000 to Rs.3,000, but for party wear it goes up to Rs.6,000,” he said.
IANS