Dehra Dun : Though elections to the Uttarakhand vidhan sabha are still over three months away, chief minister B C Khanduri seeing the weak wicket that the BJP is in the state is not taking any chances. He was recently on a foundation laying spree in the Dhumakot region, the assembly segment which he represents in the state assembly. 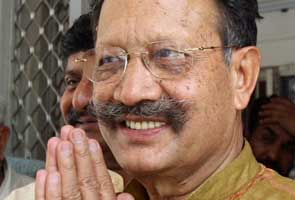 Even as his supporters claimed that the foundation stone laying spree was not because of the coming vidhan sabha elections, as the BJP high command had yet to decide from which assembly segment the chief minister would contest, but political observers here were of the view that Khanduri was trying to appease the voters of the area before the moral code of conduct comes into force.

The chief minister laid the foundation stone of about a dozen projects worth crores of rupees and also opened for public some other projects that had already been completed. This was done to convey the message to the masses that he was responsible for the developmental project.

Meanwhile realizing that the issue of corruption could become the major plank during the Uttarakhand vidhan sabha elections in the wake of the renewed threat by Anna hazare to go on fast and also that he would ask the voters to vote for the cleanest candidate, the state Congress leaders have given a memorandum containing a number of allegations against the BJP government to the centre.

Congress sources told the Hill Post that the memorandum contains various alleged corrupt acts by the BJP government in Uttarakhand and copies had been given to the Prime Minister and the home minister. â€œWe are hopeful that the prime ministerâ€™s office and the home secretariat will take cognizance of the allegations as a number of scams have taken place during the BJP regimeâ€, they maintained.

However, the main purpose is to dilute the issue of corruption should it be raked by the BJP leaders during the state assembly elections. For once the centre starts probing the allegations in the memorandum, the Congress leaders could also highlight the corruption within the BJP to counter the alleged corrupt acts of the UPA government at the centre.