Srinagar: Mountains are whitish in colour, leaves of maple trees have shaded Kashmir into gold and they say it is winter in this Himalayan region-Kashmir. The cold breeze from mountains cutting across the plains makes people to resort to indigenous shield against cold- Kangri.

Kangri or â€œKangerâ€ is more like a traditional and cultural symbol of Kashmir rather than just being warming equipment. It is made of a bowl-shaped clay pot called a â€œkondulâ€ and surrounded with a willow basket with a handle. Kashmirâ€™s use Kangri mainly as an inexpensive instrument to keep themselves warm during autumn and winter seasons, though in other seasons its use becomes necessity forâ€œHookah Smokingâ€ mostly done by the old people.

Upper reaches in the Kashmir Valley already received a moderate snowfall and dipped temperature further. The use of the warm clothes can be seen regularly these days. It is the time when Kangri is back to fight bitter cold and chill of harsh winters in Kashmir after being shelved for about seven months.

â€œAlthough there is good amount of sunshine in the day but temperature starts to come down at the dusk and dawn, as a result of this the sales of the Kangri have started to pick up from last few weeksâ€ said Ghulam Nabi Parra a Kangri seller at the Dargah Hazrathbal, one of the busiest place in the vicinity of the Srinagar city.

Kangri is a sort of mobile heater and is carried out under the Kashmiri cloak, â€œthe pharanâ€ or inside a blanket, if the person does not wear a pharan and it is this mobile nature of Kangri which is one of the biggest reasons that it has still survived even in todayâ€™s multi metallic age of various modern gadgets of heating, including gas and electric heaters. 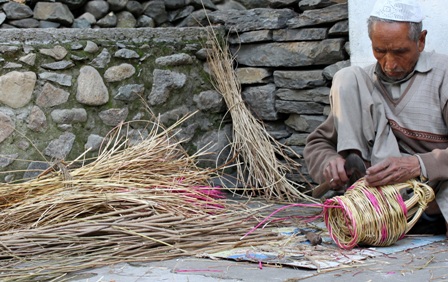 The mobility factor keeps the age old traditional, indigenous heating instrument still much in demand. Many believe it is the poor electricity service which adds reliability on the Kangri.

â€œOne can buy the every possible classy electrical appliances to keep him or herself warm, but as Kashmir is a zone where the problem of the electricity is often and everything fails, and then there is no other option other than to turn to Kangri to keep yourself warm,” said Muzaffar Ahamad Bhat, a Lecturer in a Higher Secondary School at Ganderbal.

Kangri has not been limited to heating only. It has now moved beyond that. It is exchanged as gift also. Those Kangris are decorated beautifully for special occasions.

â€œWe only make them, when someone places an order for that. Those are mostly in demand in marriage season. It is costly as well as heavy to carry. So it is just a gift.â€On taking to a Kangri maker in the Harwan area, outskirts of Srinagar city. Khazir has been in Kangri business since childhood.