Rekong Peo : A private mega hydropower project near this town in Kinnaur district has again evoked sharp response from the tribals, who have decided to keep their panchayats unrepresented.

They are saying the 1,000 MW Karcham Wangtoo Hydroelectric Project has not only compromised with their traditional water and forest rights but also affected their livelihood. 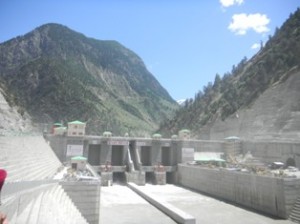 He said both the government and project authorities have to redress grievances of the villages located in the vicinity of the project.

The villagers of Urni, Yula, Chagaon and Miru in Nichar subdivision have boycotted the three-phase panchayati raj elections for 3,195 panchayats in the state held from Dec 28, 2010 to Jan 1, 2011.

The state election commission has again notified the poll schedule — Nov 16 as date of filing nominations and Nov 30 polling date.

Interestingly, nobody has turned up to file nomination papers for any post of the four panchayats and two panchayat samitis, which have 3,326 voters.

Kinnaur Deputy Commissioner Sunil Chaudhary said no nomination was filed for the 22 wards in the four panchayats.

Chairman of the state election commission Dev Swaroop said the commission would have to notify the polls again in these panchayats after certain period.

R.S. Negi, who heads the Him Lok Jagriti Manch, a people’s movement in the district, said the no-objection certificate (NoC) was not taken from nine panchayats by project authorities before starting its execution.

Brahmi Devi of Urni village said the government has completed the survey of the villages but no compensation has been adequately paid.

“Some monetary relief was given for the damage to our houses, but no compensation was paid for the loss to the crops,” she said, adding “traditional water sources have dried up due to massive construction”.

She said the villagers would not participate in the elections till the authorities “settle our issue”.

The hills across the state are alive with the sounds of villagers voicing their protest against the numerous hydropower projects that they say will further compromise their water and forest rights.

Such instances are becoming common in Kinnaur, Shimla, Kullu and Chamba districts.

The latest instance of a clash between local communities and project managements took place in June when four functionaries of the state-run Himachal Pradesh Power Corporation Limited (HPPCL) were taken hostage.

The four, who were associated with the Asian Development Bank-funded 130-MW Kashang hydropower project in Kinnaur district, were released only a day later after the HPPCL’s assurance that most demands, including on compensation, would be accepted.

The upcoming projects will not only damage natural resources and affect livelihoods but also use up a considerable chunk of forest and agricultural land, argue locals and green activists.
IANS