Shimla: A day after bye-elections to Nalagarh and Renuka assembly seats were announced, factionalism in BJP spilled out in the open with dissident leaders opposed to the Prem Kumar Dhumal government announcing setting up of a forum to rid Himachal of corruption.

Under the stewardship of Maheshwar Singh, a former BJP state president and former parliamentarian, the group has drawn up plans to file RTI applications for exposing corruption in a state where BJP is in power.

Adopting a running with a hare and hunting with the hound policy, without saying so, Maheshwar Singh told the media, â€œcorruption is a big issue in the country, and some of us who are concerned about it being widespread, after serious deliberations, have decided to constitute â€˜Himachal Brashtaachar Mukti Morchaâ€™ to rid the state of it.â€ 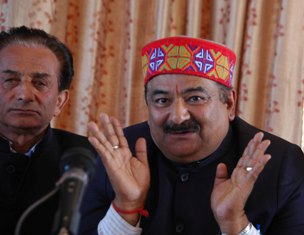 All the while alluding to happenings in the state, he said that it was ironic that those raising their voice against corruption in the country were being implicated in false cases and were being personally victimized.

Pointing out two issues, Maheshwar, who has been made convener of the forum said, â€œit was ironic that cement, an product based on local raw material manufactured in large industrial units in Himachal, was costing between Rs 300 to 325 per bag in the state and was available at a cheaper rate in Punjab.â€

Referring to a recent raid and seizure of fake drugs at two veterinary pharmacies in Baddi and Barotiwala by central agencies, Maheshwar said, â€œsurely some state agencies have been caught off-guard and found wanting.â€

Some officer must be responsible for looking the other way while such an illegal business was being carried out but no one has been held accountable yet, he said.

Besides Maheshwar, former BJP MLA and former speaker Radha Raman Shastri and another former MLA Shyama Sharma have been made co-convener of the â€˜morchaâ€™.

Former MLA, Naveen Dhiman and Bilaspur zila parishad president Kuldeep Thakur have been made general secretaries of the morcha. Others who are part of the new forum include former MLA Mohinder Sofat and HN Kashyap.

“Senior leader and BJP vice-president Shanta Kumar stopped attending the state executive meeting 2 years ago, after the state government did not pay heed to his advice about not reinstating officers found involved in corruption,” Maheshwar let reporters know today.