Dehra Dun : Even as the Uttarakhand government and its forest department gear up to kick off the platinum jubilee celebrations of the Corbett National Park from Nov 15, environmentalists in general and tiger preservationists in particular are not only appalled but concerned over the fact that 19 tigers were killed in the state in the last one year alone. 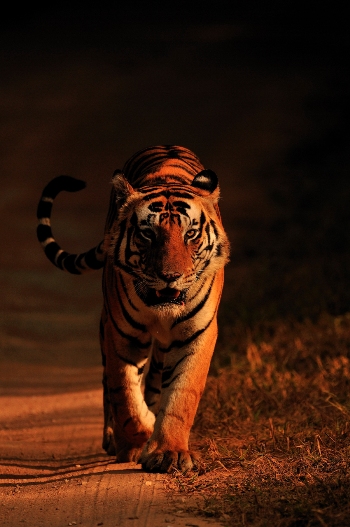 According to the Indian Wildlife Organisation, the tiger count in the country is out at 1706, of which there are 227 in Uttarakhand, mostly in the Corbett Park area. Giving details of the number of tigers lost in the country during the last one year, the Wildlife Preservation Society of India puts their number at 52. Of this the largest is in Uttarakhand 19, followed by six in Karnataka.

Asserting that Corbett has the largest density of big cats in the country, director Corbett National Park, R K Mishra claimed that this was perhaps the first time in the history of both the state and the Park, that such a large number of tigers were killed in Uttarakhand. â€œOne has to see this in the total perspective of the scenario and it must be realized that while some tigers were killed in territorial fights, while others could have died of starvationâ€, he opined.

However, man-animal conflict and the continued presence of man to exploit the forest wealth, including fuel wood and fodder continue to be the major reason for the large scale killing of tigers in the state. The most appalling of the deaths was that of a pregnant tigress, who post mortem reports revealed was carrying a litter of five, meaning whereby that six tigers were lost.

While the Uttarakhand government has sanctioned a sum of Rs 4.66 crores for the platinum jubilee celebrations, conservationists jeer were of the opinion that this sum could have been better spent on creating an appropriate buffer zone between the forests and the villages in the periphery. Alternately it could also have been used for shifting some of the villages which lie within the Corbett National Park area and are a perennial threat to conservation efforts.

They said that when icons like Amitabh Bachchan and Indian cricket captain Mahender Singh Dhoni were polling in their efforts to save the tiger, the lackadaisical approach of the Uttarakhand government in this major effort, which has roped in participants from various other countries, was something that needed to be highlighted .

Conservationists allege that the man-animal conflict near the tiger habitats, had now become a lame excuse of the state governments whenever deaths of the big cats have been reported. â€œRather than falling back on the same excuse time and again, had they made efforts over the years to resolve the problem, may be something would have come out in all these years and the position improved considerablyâ€, they told the Hill Post.