New Delhi: In the dark, a small stretch of the bank along the otherwise polluted Yamuna resembled an oasis of light. Dotted with installations of objects connected to the river and its fragile ecology, a string of over 1,000 bottles lit with fluorescent LED sticks drew light patterns across the water.

Welcome to the ‘Yamuna-Elbe Public Art and Outreach Program’, an initiative to connect the river Elbe in Hamburg, Germany, to the Yamuna in Delhi. 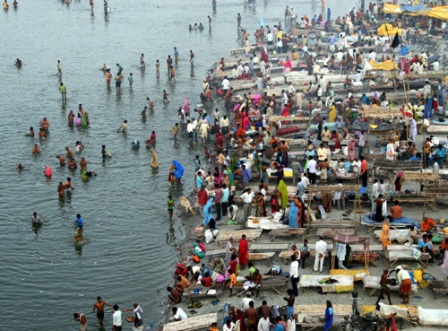 At the heart of the project is a series of public art projects, installations by artists like Atul Bhalla, Sheba Chachi and Gigi Scaria and related activities to raise awareness about the river, its sustainability and ecology and draw more people to the riverfront to experience it as a tangible urban heritage.

Co-curated by Ravi Agarwal, a Delhi-based environmentalist-artist, and Till Krause, a land artist from Hamburg, the project is trying to create “ecologically sustainable rivers in cities”. The highly polluted Yamuna is almost reduced to a drain in the capital.

“We wanted to draw more people to the river. People in the capital rarely visit the river. But ever since the project has started, it has drawn a steady stream of visitors,” said Agarwal.

“People have to see the river and decide. No amount of description in newspapers or in the media can compensate for physically experiencing the river,” Agarwal said at the project site near Loha Pul — an old iron road and rail bridge — on the northeastern fringe of the metropolis.

It made for a striking image when an illuminated wooden jetty abutted into the shallow pool and an installation of a woman’s private part swathed in bandages burned with fires – simulated by projections of coloured lights in the middle of the inky river.

Then, the replica of an eco-diversity park and a giant river water purifier shaped like a high-rise shimmered like a modern-day monument.

Over the weekend, an orchestra of wind instruments and percussion from around the world recreated the story of Yamuna in a concert, “Stories Through Sound”.

Created by multi-percussionist Suchet Malhotra and western folk musician Glenn Louvet, the concert was divided into four segments — cosmos, rivers of the forest, industry and river meets the ocean.

The musicians presented the story of the Yamuna with music from a combination of indigenous instruments like the horn, didgeridoo, bongos, frame drums, darbuka, djembe, pipes and flutes.

“We used at least 60 instruments. This symphony was created specially for the Yamuna project. This is the first time I have told the story of a river through my music,” said world musician Malhotra.

He said “composing the symphony was a revelation”.

“We discovered in the course of our research that at least three billion litres of sewage is being pumped into the water. Such facts disappoint people, hence the music to raise awareness about the river,” he said.

Over the weekend, the river and its ecology unveiled itself to children who participated in a Yamuna walk with environmentalist Vimlendu Jha.

They followed the river downstream from five kilometres north of the Wazirabad barrage where it is relatively cleaner to the Najafgarh drain, the blackest sewage channel draining into the river, and converged with feedback at Loha Pul.

“Public art has to be appropriate to the city’s discourse and speak to the people as well about contemporary concerns. People have to be attracted to public art here unlike in Hamburg which has a lot of public art,” co-curator Agarwal said.

The project was inaugurated by Delhi Chief Minister Sheila Dikshit. 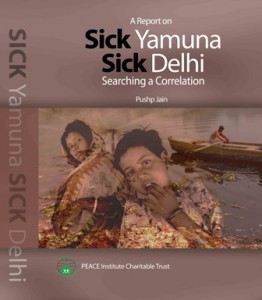 The 1,370-km Yamuna, said to be the daughter of Surya and the sister of Yama, the god of death in Hindu mythology, supplies nearly 70 percent of the capital’s water.

However, it has been at a centre of a brewing ecological disaster as the water level has receded over the years and the 19 effluent channels draining into the river have turned it toxic, threatening marine life.

One of the most polluted rivers in the country, an overpowering stench hangs on its bank and outlying areas.

While the Elbe is integral to Hamburg’s urban livelihood, the Yamuna is yet to make itself relevant to the city as an economic lifeline, eco-buffer zone and beauty — reflecting its millennia-year-old lineage.

The Yamuna-Elbe project is part of the ‘Germany and India 2011-2012 Infinite Opportunities’. The Nov 9-20 project has been brought to India by the City of Hamburg, Goethe-Institut, Max Mueller Bhavan and the Delhi government.