Shimla: With the fruit harvest over and winter setting in the Himalayan mid hills, time for trade in contraband charas has picked up that has kept the police on their toes, who are reporting laying hands on drug smugglers at various parts of Himachal. 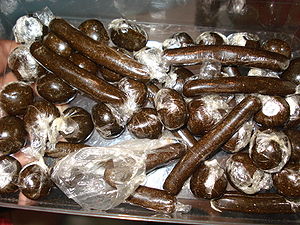 The police had not acted upon a tip-off but were doing a routine nigh check of vehicles at Dhalli-Mashobra post, when they stumbled upon a bag which contained charas neatly packed in plastic covers from Kamal, who was travelling in a car (HP-63A-0782).

The car has been impounded and the drug dealer has been arrested,â€ Tek Ram, an officer heading a special investigation unit who made the catch said.

â€œThere was no other person in the car when the catch was made,â€ he added.

Police claim that in police custody the accused was saying that he was carrying the drugs for selling it at a profit. The case is still under investigation.

A day before, police on a regular day patrol at Deha in Shimla district came face to face with Bobby Bhadur, a Nepali citizen, at 2.30 p.m..

On seeing the police before him, Bobby ran for cover. Getting suspicious about the movements of the Nepali, the police chased him down only to recover 2.150 Kgs of charas on him.

Investigating officer Dev Raj said, â€œdespite a police remand, no breakthrough had been made as to from where he had procured the charas or whereto he was taking it.â€

On 22 November, police at the temple township of Hatkoti in Shimla district nabbed Ravinder Kumar at 5.10 a.m with 5.170 Kgs of charas from him.

On 17 November, at a tightened security set up in Nahan-Kala Amb in Sirmaur district as senior BJP leader LK Advaniâ€™s Rath Yatra was passing through the area, police doing a security check of a bus passing an inter-state border post were in for a surprise catch when they found a Mumbai woman and man passenger in possession with 10.5 Kgs of Charas.

Investigating officer Ranjit Singh said â€œLalita Devi and Mukesh Kumar, residents of Mumbai were found travelling with a bag that contained candles of Charas wrapped in polythene sheets, covered with newspapers and sealed with cello tape.

The duo claimed that they were coming from Katra in Jammu and were headed to Haridwar, he said.

All these drug dealers booked under NDPS Act face many years in jail, should they be convicted for the crime.

The illegal trade in charas is sold at anywhere between Rs 30,000 to 50,000 per Kg by the producer to the smuggler, who taps the urban market, preferably a Indian metropolis where it can fetch anywhere between Rs 1 to 1.5 lakhs per Kg. In the international market, the price multiplies tenfold.

Famed for the high quality dope produced in Parvati valley of Kullu, Malana cream brand – named after the high altitude village of Malana, is considered the best charas in the world and commands a premium price both in domestic and international markets.

Smuggled out from Kullu valley, police in Thane, Mumbai, in April 2010 had seized 376 Kgs of charas, neatly packed in 12 carton boxes and had a bold â€˜Himachal Applesâ€™ label inscribed on them.