Dehra Dun : The reason could be either growing rate of unemployment or increasing lawlessness, but the sudden spurt of chain snatching incident has become a cause of concern, not only for the law enforcing agencies but the women in particular. 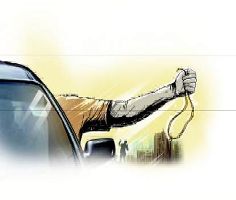 In the last five days there have been four incidents of chain snatching from various parts of the city. And while in a couple of cases the cops have denied that any such incident occurred, in two others they claim that investigations are in progress.

With barely any employment opportunities and the centre having withdrawn the special industrial package given to Uttarakhand by the earlier NDA government, jobs in the private sector have also shrunk.

But the fear factor has reached such a state in the capital of this tiny mountain state that women folk have started shying away from wearing chains. If at all they are going to a function where it is a must, they are opting for imitation jewelry chains, so that even if it is taken away, there are no regrets.

Most of the women who have to walk the streets in the crowded bazaars are feeling unsafe wearing gold, specially chains, as they are easy targets for motor-bike borne youths. Most of the mobikes involved in such incidents do not have a rear number plate, and as such are not recognized.

While a section of the police officials here claim that chain snatching is the handiwork of spoilt youth from respectable families, to meet their expenditure in indulgences in alcohol and on partying with girl friends. After all, the very fact that they possess motor cycles is an indication that they are from well-to-do backgrounds.

However, another section feels that the mushrooming of various professional and other colleges in the city could also be responsible for this increase in incidents of chain snatching, as a number of students, some with dubious backgrounds have also taken admission in these institutes.

Officially, the police claim that it is hard to prevent such incidents, for the chain snatchers strike at different places and at different times and there is apparently no modus operandi.

The victims, or for that matter passers by, hardly recognize the culprits as their faces are more or less concealed under helmets and there are thousands of youth going on motor cycles in the city and looking for the suspects is virtually looking for a needle in hay stack, they add.