Shimla : Pedalling hard on steep Himalayan roads , once again it is the Nepalese national Nirja Wright leading the Hercules MTB (mountain biking) Himachal-2011 rally and says she will win the race for the third time in a row. 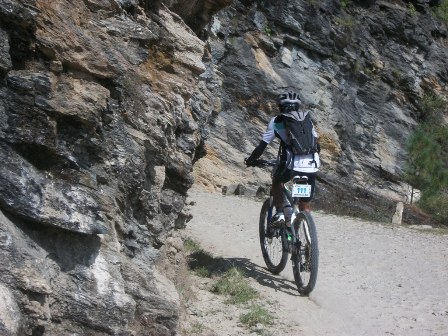 She won the race in 2009 and 2010 in this the toughest rallies in India and hopes to do it for the third time this year.

“I am focussing on retaining the title for the third time,” Nirjala said in the village of Kullu Sarahan, about 170 km from the state capital Shimla, at the base of the 3,277 m Bashleo Pass.

Event organisers said Nirjala, 32, was leading by 33 minutes in three legs among four bikes. Two cyclists were out in the first two legs.

There are four legs to go, including the Jalori Pass at 3,223 metres.

The rally that was flagged off from Shimla Saturday concludes at the starting point after a week on Oct 8 after traversing 504 km.

“This time too I am concentrating more while traversing the toughest off-road tracks as they can harm both me and my machine,” said Nirjala, who is riding a carbon fiber Scott bike.

Physical endurance is not all that is needed.

“Cleaning and repairing the bike after completing every leg, then taking a long rest and preparing the mind for the next day’s grind are important for completing the event successfully,” said Nirjala, who has been pedalling professionally for 11 years.

Last month, Nirjala, who got married to a Briton in January this year, bagged the first prize in the 6th Forest of Dean Enduro race held in Gloucestershire, Britain, Sep 25.

It was a unique experience, she said.

“The track was very technical, single and muddy as it rained heavily while the race was on. It was mentally challenging. You can’t see much as you have to clean your eyes time and again to remove mud,” Nirjala said.

She was then riding her sponsored Qoroz Professional titanium bike. She stood first among 35 female competitors by completing the 20-mile (32-km) race in 2.17 minutes.

Up next is the Langkawi International Mountain Bike Challenge – the Tropical Rainforest Challenge 2011 – to be held in Malaysia Oct 18.

Nirjala, who also participated in the 16th Asian Games in Guangzhou in China, said she spends two to three hours a day cycling through terrain riddled with obstacles such as trees and boulders in and around Kathmandu.

“Once in a week, I prefer to pedal on a long track,” she added.

According to Mohit Sood, president of the Himalayan Adventure Sports and Tourism Promotion Association, the club organising the Hercules MTB rally, 104 bikers, including 12 foreigners from France, Belgium, South Africa, US, Britain and Nepal, are participating.

“The highest point in the rally is the 3,130-m Hatu Peak (in upper Shimla). On an average a cyclist will pedal about 72 km daily,” he said.

There are separate categories for men and women.

Top-seed and last year’s Hercules MTB Himachal champion Ajay Pandit Chhetri, who recently won the Tran-Wales Challenge in Wales, is also competing along with a team of the Indian Army.