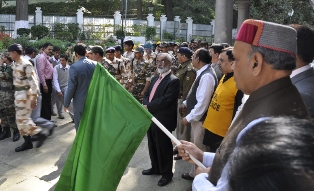 On the occasion of International Day for Disaster Reduction, the chief minister let a gathering of school children, NSS volunteers, police and civil defense personnel know that over the next four years the state would spend Rs 20 crore for training and capacity building in disaster response.

He said that a mass awareness campaign on disaster risk reduction-‘Samarth 2011’ was being launched in the state.

It was for the first time that HP State Disaster Management Authority was organizing awareness generation and capacity building programmes and the youth were being involved to spread awareness disaster management into every household, said Dhumal in the State.

Citing the example of Japan, where the people behaved very normally even in the face of grave danger when a highly damaging earthquake struck recently, the chief minister said natural disasters like earthquakes, global warming and environmental change were posing serious threats to the humanity, the world over and every person in society needed to trained and prepared for facing such challenges.

He said that Rs 90 lakhs has been released to every district for purchasing search and rescue equipments. Steps had been taken to prepare a hazard risk and vulnerability assessment (HRVA) map of the state so that appropriate mitigation and preparedness measures could be taken.