New Delhi : Simple yet elegant – Lady Gaga chose to leave her bizarre dressing style back home for her first formal appearance here Friday. She wore a one-shoulder gown by an Indian designer, added the desi twist with a tricolour hairdo, and greeted the audience with a confident “Namaste”. 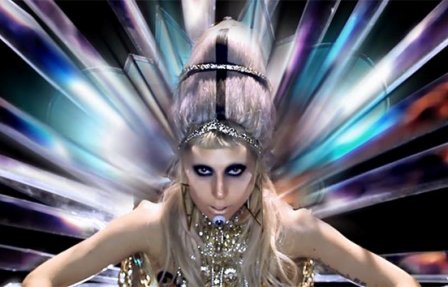 “Namaste everyone! I am so glad to be here. I could never even imagine that I would get to come to India and perform and meet my new, amazing fans that are here in India. So I would like to say thank you to all of you. My deepest gratitude,” Gaga told reporters.

The 25-year-old global pop icon, who is here to perform at the F1 after-party in Greater Noida Sunday, made a stylish entrance wearing a pair of black shades. She wore a sparkling neckpiece with simple earrings to match, but what attracted was her bouffant, which had streaks of saffron and green – colours of the Indian flag.

“Today I am wearing a dress by Naeem Khan, an Indian designer based out of New York,” she said.

Best known for songs like “Poker face”, “Just dance”, and her latest hit number “Born This Way”, Gaga says she may be known for bizarre sense of style, but she is like any other girl.

“My personal style is like any girl really…I wake up and I put on whatever makes me feel good….quite often I end up wearing my old leather jacket with a pair of fishnets,” added Gaga, who feels “the sights in India are beautiful, but the most beautiful sight is that of the people”.

Though she is excited about performing for her fans Sunday, she is already looking forward to coming back to India soon, as she said: “I can’t wait come back…to see more of India and to get to know more of the fans here.”

Gaga landed in the capital Thursday night. She is here on a four-day trip.

She claims to have been “dying” to come and perform in India, and now that she will finally take centrestage at the F1 after-party Sunday, international pop star Lady Gaga says fans will get a taste of her modern touch but with an Indian influence.

“I want to surprise you all…I’ve been working with the House of Gaga for a month now to make it beautiful. There will be some Indian influence (in my performance), but I have modernised it in my way. It will be a hybrid between my vision and the vision in India,” Gaga told reporters here Friday.

The F1 after-parties, to be held as part of the Airtel Grand Prix of India, will take place at a special, 20,000 sq ft construction at the Jaypee Greens Golf and Spa Resort in Greater Noida. They are being hosted by lounge bar Lap, co-owned by actor Arjun Rampal and restaurateur A.D.Singh.

Gaga has special plans for her India gig.

“I worked very hard. I have built a special stage for this show – it is unique for India…it has never been done anywhere else in the world, and I will be incorporating also, the collaborations with some of the Indian DJs into the performance. It will be shown on television here in India. And as I said, I have been working very hard on this, and I have been dying to come here and perform. I am excited about it,” she added.

Gaga, who was dressed in a simple, multi-coloured, one-shoulder, full-length gown, with a tricoloured bouffant, has also promised her fans “a couple of surprises”.

Her show is totally sold out, despite a whopping ticket price of Rs.40,000. But those who will miss the joy of watching the pop star live, can catch the action on UTV Stars in November.
IANS