Bangalore: Researchers in Japan claim the Himalayas have a large potential of photovoltaic (PV) electric power generation from sunlight that can supply energy to India and China. They suggest these mountains could be more ideal than hot deserts for locating solar power generators. 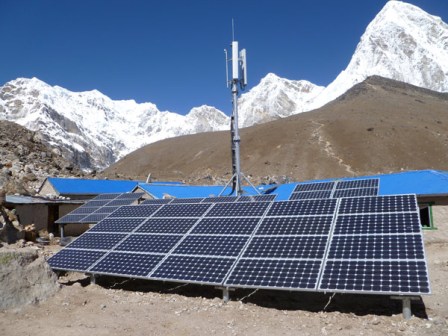 The research by Kotaro Kawajiri and colleagues at the National Institute of Advanced Industrial Science and Technology in Tsukuba, Japan, appears in the latest issue of American Chemical Society (ACS) journal Environmental Science & Technology.

According to the study, installation of crystalline silicon (c-Si) solar arrays in less than four percent of the Himalayan region could produce about 3.1 trillion kWh of energy — that was the total electricity consumption in China in 2007.

Contrary to popular notion that hot deserts are the best suited to generate solar energy, the study concludes that some of the world’s coldest landscapes – including the Himalaya mountains, the Andes and even Antarctica — are ideal locations for solar arrays.

Kawajiri and co-workers explain that the potential for generating electricity with renewable solar energy depends heavily on geographic location. They estimated global solar energy potential, based on existing available data, taking into account the effects of temperature on PV system performance, the ACS said in a statement.

As expected, the researchers found that many hot regions are ideal locations for solar arrays. “However, they also found that many cold regions at high elevations receive a lot of sunlight – so much so that their potential for producing power from the sun is even higher than in some desert areas.”

And the types of photovoltaic cell – that is made from crystalline silicon — in use today actually function better at low temperatures. Output from a photovoltaic module in the Himalayas, for example, could be 50 percent higher than output from the same module in a hot desert.

Photovoltaic electric power generation is a promising technology for generating renewable energy from solar irradiation. However, the output of PV is sensitive to its operating conditions, especially ambient temperature, the researchers said.

They said their objective was to identify the areas of the world with the highest PV potential considering the spatial and temporal variation of temperature. For this study, they partitioned the world into 64,800 regions by gridding the entire globe along 360 degrees longitude and 180 degrees latitude.

They found that regions with high solar irradiation values include the southwest region in North America, the Southern Andes region in South America, central and South Africa, Midwest Asia, the Himalaya region in Asia, the northwest region of Australia, and Antarctica.

The regions with the largest irradiation values have large PV potentials, the scientists said. “In particular, the Himalaya and Southern Andes regions have energy potentials due to the combination of large irradiation values and low temperatures.” The Himalayan region is especially attractive because it is near regions with large future energy demands, such as China and India, they said.

The researchers admit that many problems must be addressed when installing PV systems in high altitude regions, such as transporting the PV system and increased need for maintenance due to the severe environmental conditions.

While Antarctica also has large PV potential because of its high irradiation and low temperature, the feasibility for utilizing this potential in this region is low due to the large seasonal variance of PV energy generation and the difficulty of maintaining the PV system.

“If some way can be developed to store the generated energy, in the form of hydrogen or refined metals, then it may be possible to utilize the large potential in this region in the future.”

“The framework we have presented show what type of PV module is suitable for different regions,” the researchers said. “These findings could help stakeholders to evaluate the potential for PV energy generation considering temperature in addition to irradiation.”

Although they have focused on temperature, the researchers hope to refine their work in future by considering other variables such as transmission losses, snowfall and the cooling effect by wind.

“We hope that this work will provide a first step to investigate the most suitable locations for PV energy generation in the world,” the researchers said.