Shimla: Following in the footsteps of his predecessor, chief minister Prem Kumar Dhumal today was laden with a bunch of marigold flower garlands while commissioning the 4.5 MW Bhawa augmentation power plant at Katgaon.

With inauguration of the augmentation plant, capacity of the HP State Electricity Board (HPSEB) plant on Bhawa stream in Satluj basin has gone up to 124.5 MW. 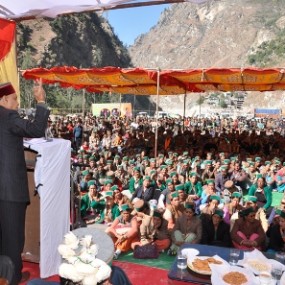 Speaking after inaugurating the new small plant at Katgaon, chief minister Prem Kumar Dhumal said that the Bhawa augmentation plant was expected to fetch an annual income of Rs 7.85 crore.

He said that two percent of the project cost had been spent on local area development. The augmentation plant has cost HPSEB Board Rs 56 crore.

He said that the project construction was done in an environmentally friendly manner as eight ropeways were laid instead of constructing roads for transporting material to the site, resulting in saving of the ecology.

HPSEB is already operating a 120 MW plant on Bhawa stream.

Interestingly, early in the current term and soon after assuming office in December, 2007 Dhumal had instructed that delegations and people should not spend extravagantly on flowers and gift items.

Instead he had sought funds for the chief minister relief fund, which are used for providing assistance to the needy, including cancer patients.

Former chief minister Virbhadra Singh is known to accept flower garlands, which is a traditional way in much of rural Himachal of greeting a guest or a dignitary at a formal function.