The winners will now join 80 schools to compete in the semi finals . Loreto Convent School was the runners up .

Around 270 students from 45 schools participated from Shimla , out of which six schools competed in the city finals. 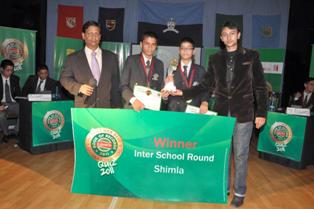 Organisers said this year the quiz is being organised in more than 3500 schools to make the pursuit of knowledge an engaging and competitive process .

The multi-city inititaive is being launched in partnership with â€˜know and grow with Derekâ€™ and involves participation of students from class 8 to class 12. It is being organised at inter-school level , semi-finals and national finals from July to December 2011 .

Noted quiz master Derek Oâ€™ Brien and founder â€˜know & grow with Derekâ€™ will host the national finals.The entire database including content , research material and quiz software is being provided by him .