On most summer evenings in June when the crowds gather for a stroll on Shimlaâ€™s Ridge and the Mall it can be highly refreshing despite the milling crowds.

But there is a nagging problem of noise,harsh and loud emanating from the Ridge address chamber. 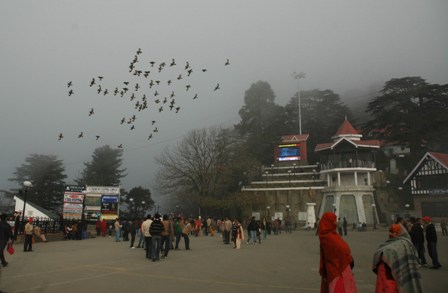 Here the state police has a shoddy orchestra playing. This band urges passing riff raff tourists to come up and sing a song of their choice with the band playing along. The singers are charged a small amount which goes into the red cross kitty.

One by one the casual singers come on to the stage. Almost none can sing, most are just excited by the impressive stage on the Ridge and the encouraging band playing along,so they croak along, often giggling into the microphone,sometimes shrieking, punishing the thousands of holiday makers in downtown Shimla.

This mindless singing by non professional singers is misery to the walkers on the Ridge and the Mall who are forced to listen to this trash.

This mindless croaking has gone on year after year, for weeks every summer.

One wonders where is the aesthetics of the district administration. Why canâ€™t this cheap practice come to end.

Why doesnâ€™t anyone protest against this forced sound pollution bombardment fired at the tourist and the local in the heart of Shimla.