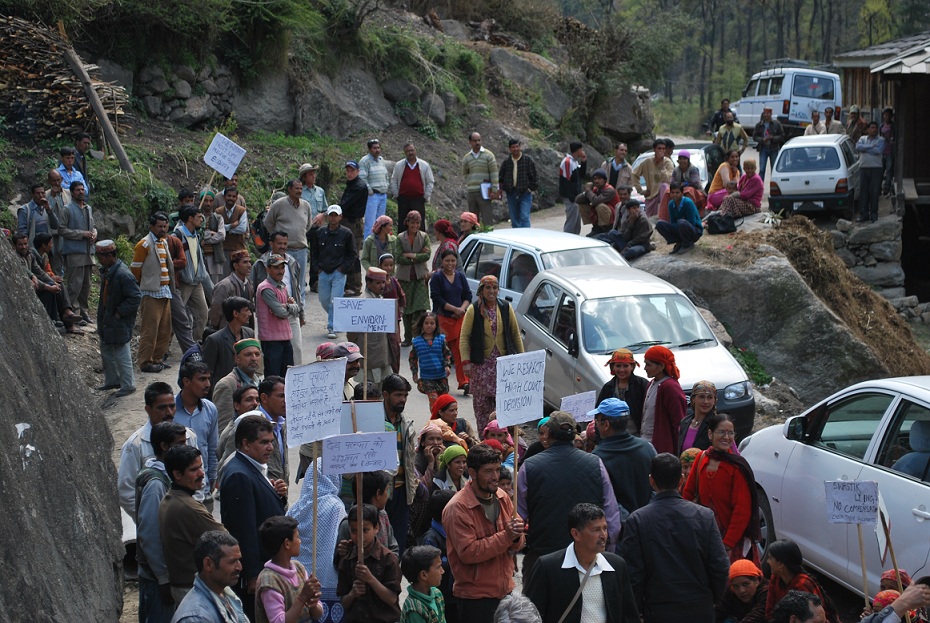 “Over our dead bodies” was the cry of the villagers from the Tirthan Valley in response to a hydel project under arbitration in a Chandigrah Court. 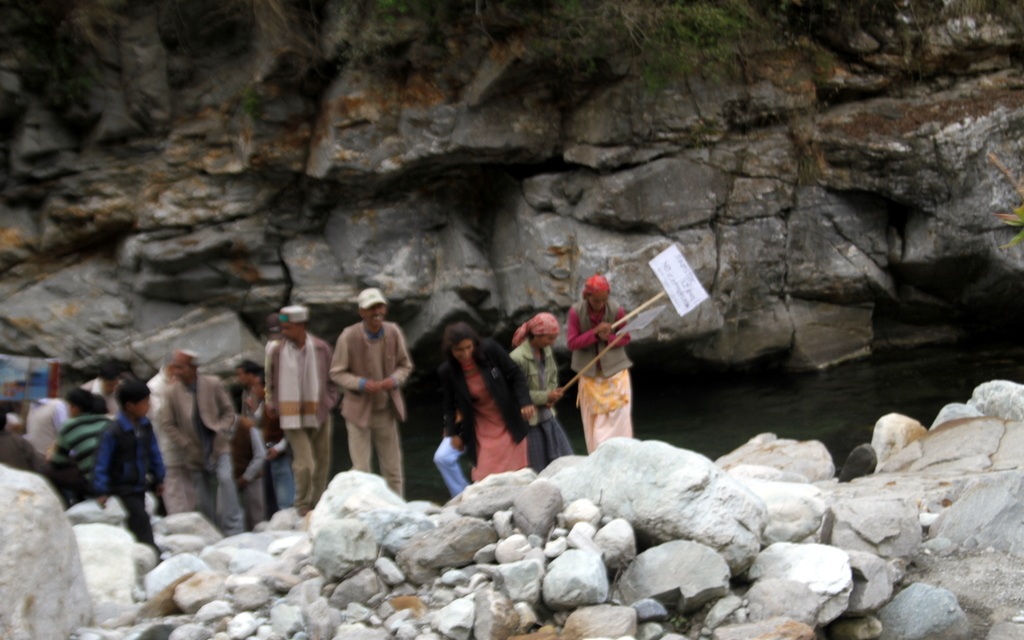 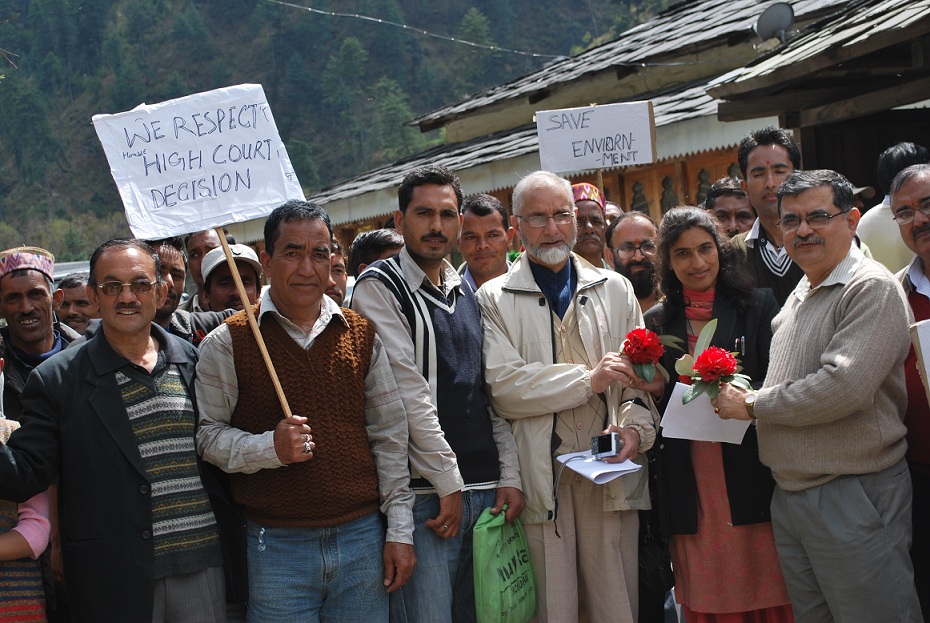 It was an amazing day for the Tirthan Valley. A day when all the villagers of the Tung Panchayat sat on the road to block all the roads carrying a team of environmental experts and the Swastik Company team, which was allotted a hydel project banned by the honorable High Court. The BTCA contingent of women led by Mr. Gopal Krishan (Secretary of the local NGO BTCA ) and the ecotourism men led by a local tourism Professor, had a two hour demonstration against the hydel Swastik company and those wanting to develop hydels in the legally protected Tirthan Valley. The environmentalist contingent also consisted of Mr. Dile Ram Shabab (a former MLA who has spearheaded oposition against all hydels in the Tirthan catchment) , Mr. Raju Bharti , Mr BS Rana ( who is fighting hydel companies on his side of the Upper Seraj Valley of the Tirthan Catchments ), Gunam Singh (noted environmentalist ), members of the Seraj Tourism Development Association, and various other homestay and ecotourism team members from the valley. All oppose the negative environmental, economic, and social impacts of hydel development in the pristine Tirthan Catchment. In 2006, the HP courts banned hydel development in the Tirthan Valley as it was part of the catchment of the Great Himalayan National Park. 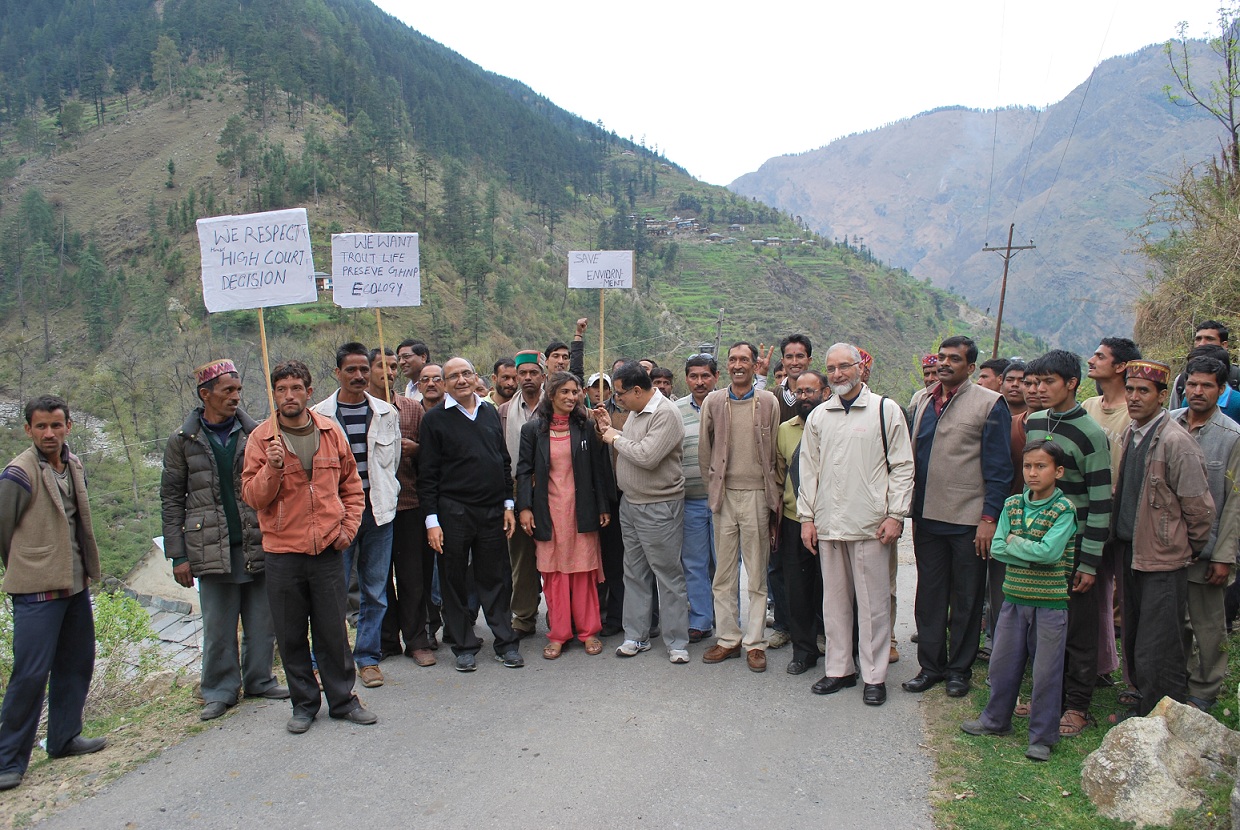 After delaying the team of experts for one hour from inspecting the site allotted for the hydel company, it was only on the persuasion of local leaders, Fisheries Director Mr. B D Sharma and Director Great Himalayan National Park Mr. Ajay Srivastav on the promise that there will be no hydels on the Tirthan River, that the villagers allowed the team to touch the holy waters of the tributary.

The entire Tirthan Valley gives employment to hundreds of people through ecotourism options like fishing and home-stay and is one of the finest spots for fishing in Himachal Pradesh. A 2.5 crore fish breeding farm for the brown trout is under construction and will be inaugurated in April/May this year for stocking the river for anglers. Local environmentalists have been pooling funds to fight the case against these hydels in the entire Tirthan catchment for the last five years, knowing how any development will negatively impact the region.