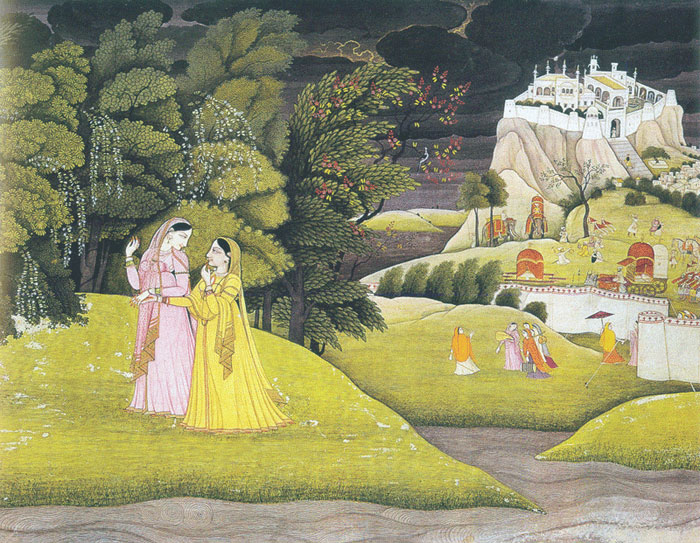 To save and revive the famed Kangra School of Paintings, the erstwhile Katoch Royal Family of Kangra has dedicated their Museum to honor Maharaja Sansar Chandra their ancestor and are organizing workshops about the famous school at Kangra Fort.

Counted among the finest miniature paintings in the world, the Kangra School of Miniature Paintings flourished during the reign of Maharaja Sansar Chand Katoch (1775-1823), who was a great patron of the Arts.

The Katoch dynasties, rulers of Kangra, have a long lineage that extends over several centuries. Nagar Kot or the more commonly known as Kangra Fort remained the seat of Katoch power and was among the strongest citadels in princely India that was rarely broken into by invading armies.

Royal patronage of Sansar Chand Katoch had commissioned about 40,000 pieces of miniature art, some of which today adorn the gallery of Royal Albert Hall in London . The miniatures are an intricate work, flawlessly executed with a subtle brush.

Miniatures derived their name from its diminutive size and intricate designs. The colors deployed used were made from minerals, vegetables, precious stones, indigo, conch shells, gold and silver.

The fine stroke of the artists brush conveyed the themes from Ramayana, Mahabharata, Bhagvata, Purana, Nayaka, Bara-Masa, Rag Mala, Rasikpriya, Rasamanjiri and others.

One striking feature of the ancient Indian Kangra paintings is the verdant greenery it depicts. The style is naturalistic, and great attention is paid to detail. The foliage depicted is vast and varied. This is made noticeable by using multiple shades of green. The Kangra paintings feature flowering plants and creepers, leafless trees, rivulets and brooks.

The Kangra artists adopted various shades of the primary colors and used delicate and fresher hues. For instance, they used a light pink on the upper hills to indicate distance.

Kangra paintings depict the feminine charm in a very graceful manner. Facial features are soft and refined. The female figures are exceptionally beautiful.

Later Kangra paintings also depicted nocturnal scenes, and storms and lightning. The paintings were often large and had complex compositions of many figures and elaborate landscapes. Towns and house clusters were often depicted in the distance.

The Kangra painters used colors made of vegetable and mineral extracts. They employed cool and fresh colors. Kangra paintings are known for the lyrical blending of form and color.