Shimla: Expressing no dissatisfaction with being shifted out of the Steel Ministry, union minister Vibhadra Singh said that micro, small and medium enterprise had much to offer and a lot of work needed to be done.

Virbhadra Singh, whose portfolio was changed in the recent cabinet reshuffle carried out by Prime Minister Manmohan Singh, was interacting with media persons after reaching Shimla on Monday. 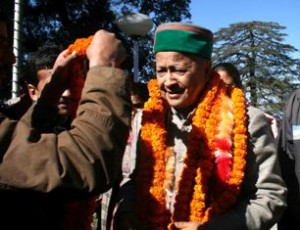 Accusing the BJP government in Himachal of spreading canards, he said, â€œa deliberate campaign was launched in the media about me being dropped from the cabinet whereas it was only a change of portfolio.â€

â€œMajor chunk of the industrial sector which provide many jobs are in the micro, small and medium enterprise sector,â€ said Virbhadra, â€œand it will only provide that much opportunity for attracting investments from countries like China and Japan.â€

Asked about the audio CD case in which a key witness had turned hostile, the union minister said refused to comment saying that the matter was sub-judice and he would not like to talk about it.

However, he did say that the truth would surface despite all efforts being made by the state government to implicate him.
About the recently concluded polls to panchayats and urban local bodies, he said that BJPâ€™s victory claims were hollow.

The blatant misuse of official machinery used to clobber together a majority in Zila Parishads and urban local bodies was for all to see and it in any case would not change the ground situation, he said.

These polls were only an indicator and the real situation would finally become visible at the assembly elections, where congress would outdo others, said Virbhadra.